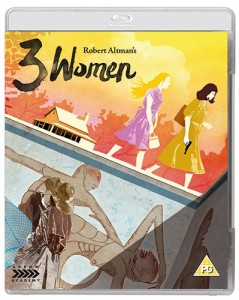 Ingénue Pinky (Sissy Spacek) moves from home and gets a job at an old people’s home. There she meets and eventually moves in with Millie (Shelley Duvall), an annoying, yet sad (she doesn’t realise how annoying and ‘invisible’ she is) co-worker. The third woman in this triptych is Willie (Janice Rule) a silent, pregnant artist, who covers any available space with a series of beast-like paintings.

Despite this being hailed as a Robert Altman masterpiece, I’d never seen it. I do tend to like the more ‘highbrow’ films we get sent at 60 Minutes With but in truth when his arrived I just wasn’t in the mood for some long, serious, dark film. That’s just what it is; dark, serious (not that long), also I’m not a huge fan of Shelley Duvall (I find her almost unwatchable in The Shining). However, ten minutes into the film I was completely hooked on the lives of these three women.

They appear to be 3 parts of one; Millie, the flirty, available, attractive yet annoying type. Pinky; childlike and innocent. Willie; an earth mother, drifting and silent. Each character has depth and the acting is fantastic, especially Duvall who portrays Millie with a sad desperation and longing, forever talking, always planning dates that never happen, yapping incessantly to any man who comes near her. The only man she has is Edgar (Robert Fortier) who is Willie’s drunken, macho/cowboy husband.
Men are all around and Millie flits like a bee from one to another, all of them ignoring her through a sort of drunken man-haze. The only man who has a solid part in the film is Edgar, and he is a one sided letch.
Spacek’s character is perhaps the most interesting. Playing at first a total innocent, after an incident in the film (a major plot point – no spoilers) her personality changes completely and she appears to turn into a confident version of Millie, and here is where Duvall’s acting becomes a powerhouse of confusion and disbelief.

Willie says about 3 lines throughout the movie and is largely resigned to wandering and painting, through these paintings we see her truthfully. Water figures play a huge part in the film and Willie paints the bottom and sides of empty pools, filling them with Greek monsters, talonned Gods gripping naked pregnant women and ripping them apart. The film itself is a Greek Tragedy, the women wail and bemoan and the men fade into the background of manly pursuits; drinking, fucking, drinking, shooting, fucking and using women.
Apparently Altman was inspired by a dream and the whole film reflects this dream-like story. It’s an interesting film, one that reminds me of early European Cinema like Ingmar Bergman, and is quite a hard watch in places.
Another well done to Arrow!

Review by Tina (co-host of 60 Minutes With) from a disc kindly supplied by Arrow Films.

I used to live in Los Angeles and write about Rock bands. Now I live in wonderful Wales and write about films. I like video games (especially RDR2) and am also a painter...gratuitous plug: follow my art account on Instagram @artbytinar
Review: IMAX May 2015 Entertainment Chat