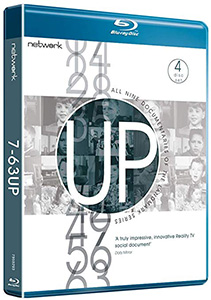 How on earth do you write a review of one of the most comprehensive, relevant, important and astonishing documentaries ever made? How do you do justice in a few paragraphs to a literal life’s work? How can you encapsulate the joy, fear, emotion contained within?

Quite simply, you can’t. You can only outline and advise anyone who is remotely interested in documentaries (and life itself) to take the time to watch this truly incredible series. I’ll also mention  – and I think this is the first time I’ve ever done this – this Blu-ray box set is ONLY £24 on Amazon. A bargain – buy it here. (Or £18 for the DVD set).

Inspired by this Jesuit motto and World in Action founder editor Tim Hewat’s anger at Britain’s rigid class system (which in my opinion is still in place) the original ‘7 Up’ made and then  broadcast in 1964, brought 14 children from different social backgrounds (upper class, and lower class) together to share their personalities and thoughts in a filmed experiment  to find out if these children’s lives were pre-determined by their backgrounds.

“We brought these children together because we wanted a glimpse of England in the year 2000. The union leader and the business executive of the year 2000 are now seven years old.” (Narration from original Seven Up! series which aired in 1964)

Across the series Andrew, Charles (who only appeared until he was 21), John (who also dipped in and out), Suzy, Jackie, Lynn, Sue, Tony, Paul, Symon, Nick, Peter, Neil and Bruce discuss practically everything that a human can relate to: race, religion, class, gender, education, relationships, health, freedom, discipline, workers rights, money, politics, prejudice and more – the programme attempts to delve into every aspect that makes up their lives, sometimes with emotional, even angry outcomes.

Helmed by director Michael Apted since the second series in 1970 (he was a researcher on the first series in 1964), this landmark series has revisited all the children (although not every child continued to appear as they grew and could refuse to take part) every seven years. Ages 7, 14, 21, 28, 35, 42, 49, 56, and finally 63 (I watched every single episode).

The series provides not only an update on the group, but a truly insightful look at how their backgrounds and class have affected their life choices and how those choices formed their opinions and outlooks.

It was only supposed to be one film, but due to the success of the first one featuring the funny, and very charming thoughts of a group of seven year olds whether they be privileged privately educated toffs who read the financial times (at 7), or sad little curly haired boys in care who don’t want to eat greens, World in Action knew they were on to a winner.

Although the early episodes weren’t overtly examining the British class system, its intent was there, and as the series and the people in it got older it changed. It became less about class and more about the drama of everyday life, marriage, children,  jobs, success, failure, love and loss. Things we all relate to and experience.

It is without a shadow of a doubt all life encapsulated in a series of films, and watching these peoples stories deeply affected me. You can pick one life in particular; Neil. Such a cute, charming little boy at 7 ,who at 14 has changed to a serious worrier, at 21 he’s homeless, 28 he’s suffering greatly, thin and walking in a that hopping/skipping way some men with mental health problems move, his story is incredible (no spoilers)

But then there’s Nick, another little love from a Yorkshire farm who I have thought about every day since seeing 63 up. Suzy, at 7 doing ballet, so bloody annoying and posh, who at 28 grows into a fantastic woman and mother.

John who I disliked intensely even though he was just a little boy, works tirelessly to help disabled people in Romania. Bruce, so shy, an angel of a child, gets a deserved happy ever after. The three London girls, as rough as fuck and gobby with it, experience all human misery and yet rise above it.

Symon who ends up with literally over a hundred kids because he and his lovely wife are foster parents. Paul who was in care (with Symon) who finds a great wife and ends up in Australia.

Their stories are OUR stories. Sure it’s not an in depth look at the UK class system and doesn’t tell us anything new as far as that goes, but the upper classes will always have the upper hand, best education, best jobs etc (just this week I read that only 12% of people working in the film industry are state educated, and let’s not forget that less than 1% of any governing UK cabinet went to state school). So nothing has changed, nor will it. Nope, this is a programme that shows us that no matter what our class, we all feel the same joys, fears, hopes…

I can’t praise this documentary series enough. It is quite simply astonishing work and I love it.

I used to live in Los Angeles and write about Rock bands. Now I live in wonderful Wales and write about films. I like video games (especially RDR2) and am also a painter...gratuitous plug: follow my art account on Instagram @artbytinar
Review: Aniara Live Event: Eurogamer Expo, ExCel London, October 17th – 20th, 2019