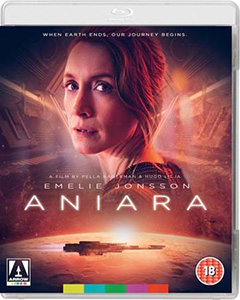 Aniara is a science fiction poem written by Swedish Nobel laureate Harry Martinson in 1956. The title comes from ancient Greek and means ‘sad/despairing’. The poem tells the tragedy of a spacecraft bound for Mars with a cargo of colonists from a dying Earth. After an accident, the ship is ejected from the Solar System and into deep space with all her crew and passengers.

The Mimarobe (Emelie Jonsson) works on the Aniara, a state of the art spaceship that takes Swedish passengers from Earth to Mars in three weeks. Her job is the Mimarobe in the ‘Mima’, a computer/thing that makes people who connect to it experience earth and ‘feelings’.

The Aniara veers off course due to a collision with space debris, and on losing all the ships fuel the captain lies to the passengers and crew and tells them it’ll be two years before they can swing around a planet and return to earth. The Mimarobe shares a cabin with the ships astronomer who tells her it’s a lie , and they are adrift and lost.

Her job becomes essential to keeping the passengers calm on board, but the Mima becomes overwhelmed at seeing all the human’s desires and pain, and commits suicide.

Over the years there are deaths, murders, sex, births, love and a mystery probe which the survivors hope is an emergency fuel cell sent to help rescue them.

Now I’m sure my description of the story sounds not just boring, but existentially boring (if that’s even a thing). You never know what a Mima is or what the probe is and it really doesn’t matter.

Ariana is a quirky film which I found rather profound in a dream-like mash up of Solaris, 2001 and well… nothing I’ve ever seen before. It’s depressing yet uplifting, confusing, but ultimately watchable.

Destined to be a cult-classic, and even its nihilistic ending wouldn’t deter me from a rewatch.

I used to live in Los Angeles and write about Rock bands. Now I live in wonderful Wales and write about films. I like video games (especially RDR2) and am also a painter...gratuitous plug: follow my art account on Instagram @artbytinar
Soundcheck: Kick Axe – Welcome To The Club Review: 7 – 63 UP