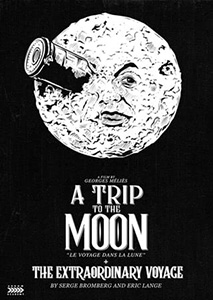 One of the few surviving short films by innovative French film maker Georges Méliès, A Trip to the Moon is a magical tale of a group of astronomers who board a rocket ship and are fired like a bullet out of a gun towards the moon.

Arriving at their destination they find that it is inhabited by some very strange, and not entirely friendly, creatures. So an escape is needed and a quick return to planet Earth.

Using in-camera visual effects which were unheard of at the time, accompanied by beautifully painted and stylistic backdrops, Georges Méliès created short films which are still magical to watch over 100 years after they were made.

This Blu-ray release from Arrow Films not only presents an amazing restored version of A Trip to the Moon, it also has an absolutely fascinating documentary which charts the life and work of Méliès and the incredible restoration process that went into bringing this historic short film back from an almost unwatchable state, into an amazing Blu-ray release.

A 214 page hardback book is the icing on a very tasty cinematic cake that should be snapped up by anyone with even the vaguest interest in the history of cinema.

The Long-Lost Autobiography of Georges Méliès: Father of Sci-Fi and Fantasy Cinema