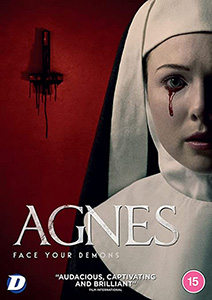 Carmelite Convent somewhere in America asks for help with Sister Agnes (Hayley Macfarland), who appears to be possessed by a demon. Okay before I go on, this conjures up a scary story doesn’t it? A group of stern nuns coping with a demonically possessed woman?

Well – no. The tone of this is somewhat off-kilter. You can forgive the terrible makeup on Sister Agnes (literally dark eyes circles and back combed hair) but there’s this underlying attempt to be humorous throughout the first part of the film that leaves you wondering what exactly the director is aiming for.

Enter Father Donahue (Ben Hall) and Benjamin (Jake Horowitz); a man who is about to take holy orders and become a priest. The bishop orders them (in a very strange scene where it’s hinted that Father Donahue has been sexually abusing girls  – comedy style) to the convent to exorcise Sister Agnes.

We now are subjected to further confusion by the story seeming to shift to Sister Mary, quiet, beautiful and Agnes’ friend.

Where the tone verged on comedy before, the shift in feel is now – I don’t know.

Enter Sean Gunn as stand up ‘comedian’ Paul Satchimo who apparently knew sister Agnes. At this point in the film we get to watch 10 minutes of his stand up which is completely unfunny, I don’t know if this was on purpose or not.

This is such a confusing film. The publicity photos are so misleading and the positive reviews I’ve read of this are a puzzle as a lot of them state this is a deep philosophical treatise on what it means to be a nun.

The tone is all over the place, as is the story. We are huge supporters of independent film but this is unfortunately one of those films that not only makes no sense whatsoever, but also meanders about  and seems to be stock full of filler until it has a very sudden end that leaves you feeling you just wasted 90 minutes of your life.

Review by Tina from a streaming link kindly supplied by Dazzler Media.

I used to live in Los Angeles and write about Rock bands. Now I live in wonderful Wales and write about films. I like video games (especially RDR2) and am also a painter...gratuitous plug: follow my art account on Instagram @artbytinar
Jack J Hutchinson – Autumn UK Tour Review: Rio Conchos