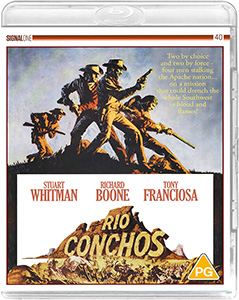 The 1960s were a great time for westerns, whether they came from America or Italy/France/Germany/Spain.

Rio Conchos is one of better ones. Starring Stalwart ‘cowboy’ Richard Boone as ex-Confederate Army officer Jim Lassiter, who is  known for killing any Indian he comes across for revenge after the murder of his wife and baby.

He’s arrested and on the officer seeing his gun, he is offered his freedom as long as he finds the rest of the guns which have been stolen from the army. He agrees as long as he can take his friend; knife-wielding Mexican bandit and fellow prisoner Rodriguez (Tony Franciosa).

With the great Edmond O’Brien playing the Col Kurtz type bad guy (way before Apocalypse Now) you have a pretty solid western. Which actually is quite violent considering the time it was made.

Boone made so many westerns and is highly watchable in a macho – yet sympathetic role.

I used to live in Los Angeles and write about Rock bands. Now I live in wonderful Wales and write about films. I like video games (especially RDR2) and am also a painter...gratuitous plug: follow my art account on Instagram @artbytinar
Review: Agnes UK audiences rally behind “RRR” star Ram Charan; Debuts no. 2 at UK box office