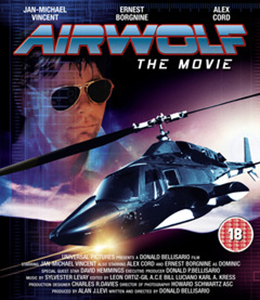 Dr. Charles Henry Moffet (David Hemmings) is a crazed scientist who has created the titular “Airwolf”: a futuristic helicopter with an advanced weapons system, and after killing other members of his team (a secret government agency called “The Firm”) during a test flight, defects to Libya to live the high-life of a manic madman.

Enter Deputy Director Michael Colesmith Briggs (Alex Cord), codenamed Archangel & who oversaw the Airwolf project, who has to try and recruit Stringfellow Hawk (Jan-Michael Vincent) to try and retrieve it.

Hawk is the only other man who can fly Airwolf, but is reluctant to help unless The Firm agree to try and find his brother who is M.I.A. in Vietnam. Hawk also gets his old flying buddy Dominic (Ernest Borgnine) in on the action, and together they try to take down the evil Dr. Moffet.

Airwolf is 80’s cheese of the highest order, and I mean that in the most complimentary way. It is full of quotable lines (“You can’t just swim, eat grapes and get laid all the time”), ridiculous characters (Hawk plays his cello to a wild Eagle that lives near his lodge, and also has a dog who overtly sniffs a womans crotch during the movie…twice!), has an antagonist who stops just shy of twirling a large moustache because he is that theatrically evil, and of course has that helicopter which features in some aerial action.

Any movie that begins with a helicopter stunt by a chameleon (honestly!) and then just gets progressively crazier, is always a big thumbs up from me.