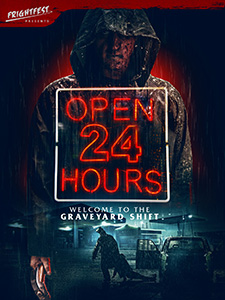 After finally managing to leave the clutches of her controlling and abusive serial killer boyfriend (by setting him on fire!), Mary (Vanessa Grasse) tries to rebuild her life, despite being plagued by paranoia and disturbing visions since being released from psychiatric incarceration for her felony.

When she is told that her ex-boyfriend is on the loose from prison her paranoia ramps up, and upon finding a job working the night shift at a garage in the middle of nowhere, her visions start to become all too real.

Open 24 Hours is a low budget horror which works well within its limits of locations, with the grimy garage playing a focal point for the main part of the action, which culminates in quite a bit of blood being shed.

While not exactly subtle in its portrayal of PTSD, the ever increasing frailty of Mary’s mental state makes her even more vulnerable as she views seemingly innocent garage customers as potential killers, which then leads you to also question as to who may or may not just be a customer as opposed to a potential crazed killer.

Helping her in her new employment is Bobby (Brendan Fletcher), who has worked there quite a while and frequently helps himself to beer and snacks from the shelves. But is Bobby all that he seems? Is anyone all that they seem as Mary’s visions become more frequent and more vivid?

While not high on scares, Open 24 Hours delivers on thrills and bloodshed, and doesn’t overstay its welcome with a 95 minute running time.

Worth a watch for the committed horror fans.

Review: It All Begins with a Song Review: Airwolf