Well this was a pleasant surpise..
Rewind a bit.

Now I am not a young man, true I am not a fossil of humanity riddled with dust but nor am I a sprightly young buck. Due to being this age I can remember arcades though, proper ones.

I am not talking about the kind of arcade superglued onto the edge of a bowling alley these days. Arcades full of big plastic things that cost a quid to play and spurt out tickets to trade for so called prizes. The kind of arcade where you can spend thirty quid on sort of playing something and end up with 300 prize tickets which you can trade in for a small plastic dice if you are lucky. As it turns out that slow cooker in the prize cabinet will never be yours.

Seriously, in a bowling alley near me, there is a prize cabinet that offers the standard big prizes such as a drone or ‘not Beats’ headphones but next to that there was a slow cooker and a toastie maker. Who spends five hundred quid spinning a big plastic wheel of fortune to get enough tickets to get a bloody toastie maker? What evil parents tell their kids ‘No you cant have that remote control car because I want to slow cook a ham hock!‘

Anyway, as usual, I digress.

I mean ‘old’ arcades full of small cabinets with tiny CRT screens in which you could pump old 10p coins and play your dreams, play the kind of games that you could never hope to have at home as the phrase ‘arcade perfect’ at the time was very very flexible for home conversions. 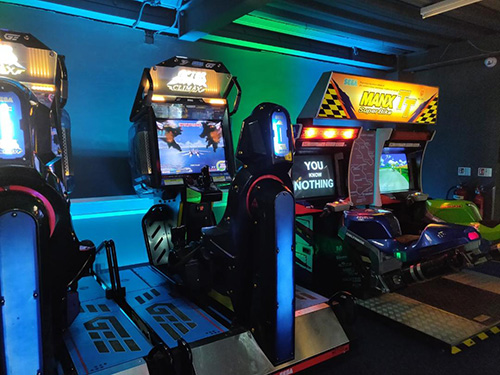 For me this is an arcade, rows of old cabinets with the odd special machine thrown in. The sit down Star Wars cabinet, the 4 player Daytona USA. These were places of beauty apparently long gone, lost to the annuls of history as machines stopped working and home consoles overtook the arcade as they became more powerful.

What a tragic loss.

Now if only a place existed where hundreds of machines had been lovingly restored and given back to the masses to re-live the pure joy of the arcade and see how games used to be played, indeed how these games were meant to be played.

Turns out one of these places opened near me a couple of weeks ago.

Upon finding out that this cave of wonders existed, it was time for me to roll up a copy of  ‘Whizzer and Chips’ and put it in my back pocket, get some fake tattoos (free inside a pack of bubblegum), get on my BMX and check it out.

Its name is Arcade Club and the first rule is if you can get to it do so and then talk about it,

Arcade Club promises a flat entry fee to get in and all arcades on freeplay. It promises a mix of games from 90s all the way back to the 70s. It promises pinball. It promises a space on a third floor acting almost like a social zone with a mix of old and new consoles, VR, PCs etc if that is your thing.
It promises over 200 arcades from different eras.

Does it deliver? Yep.

To get entrance is £16 for adults and £8 for the kiddywinkles. For this you get a wristband that allows you to come and go as you want during the day. You may think this is expensive but compare it to other similar pursuits and it stacks up well. Its the equivalent price of around one and a half films at the cinema or a couple of games of ten pin bowling so when stacked up against competition its not bad value at all.

The first thing that struck me was that it was smaller than I expected. For some reason I expected it to be huge to fit everything in. That was my child self forgetting how small some old machines are. We are all used to playing consoles at home on at least 40 inch screens these days, I forgot that many arcade have little 14 or so inch screens. Size doesn’t always matter so they say. Clever people those ‘they’. 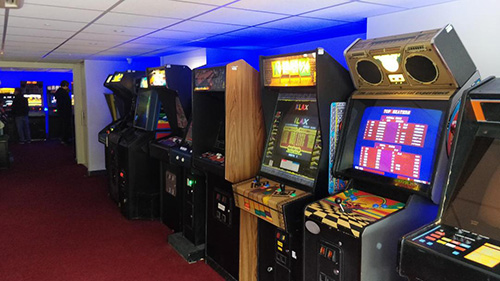 On the ground floor you will find your larger machines. Your Daytona USA is there. So is Outrun and its sequel, you want hydraulic Afterburner or Space Harrier? You are in luck. Its a great mix of the larger machines from the late 80s and 90s.
There is a small section for pinball, which I did wish was a little bigger. You also have your food section and bar should you want a pint while you play. 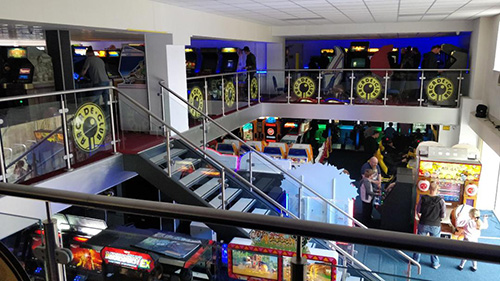 Go up the stairs to the next floor and we are in the proper retro domain. The small stand up cabinets, the area where I relived my youth with a smile on my face. Its a greatest hits of the 70s and 80s with plenty of games I had never played as well. It was every games magazine I owned in front of me. I had never played R-Type actually in an arcade, and now I have. It was brilliant.

What pleased me the most was the sit down Star Wars arcade. This was the first arcade I ever played and I go to play it again. Yes the cabinet is surprisingly small when you are in it and yes the screen is miniscule by today’s standards but getting to blow the Death Start up again was priceless. 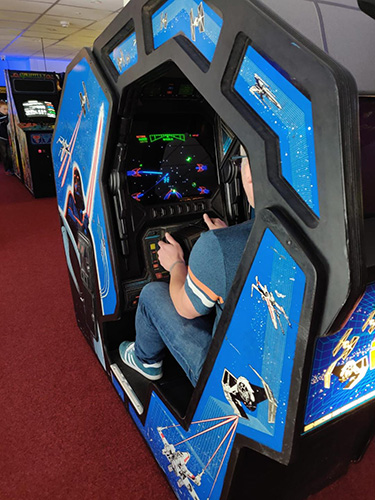 I got to relive Time Pilot a game I spent an entire holiday playing in Cyprus once, again the memories this brought back to me were fantastic.

The oddest experience was playing Asteroids. Odd in the way of how bright the bullets you fire are on the little screen in front of you. Its retro HDR people.

There are some absolute classics on the ground floor, seriously the technology around some of the sit down moving cabinets is still genuinely impressive, but it was this floor that felt like home.

I did venture onto the third floor where there is a smattering of consoles, which could be expanded on, some VR, some PCs running Fortnite etc. For me it felt a bit too much like a social club up there. I was more comfortable downstairs with the other middle aged teary eyed nostalgia drunk masses. 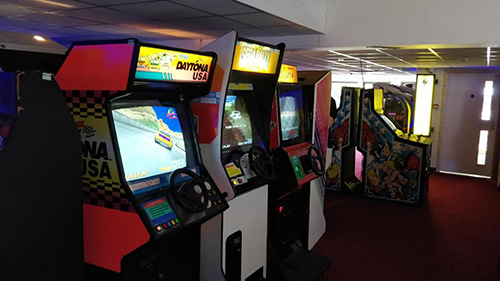 There were plenty more but I think I suffered sensory overload.

Arcade Club then. Is it worth it?

The only negatives I had was that it did get very very busy so getting a game on what you wanted later in the day was harder, But then it has only just opened so it is to be expected and I would rather see it busy than quiet.
Also despite a copious amount of fans on the go it did get hot inside and a wee bit smelly. I can forgive this as I assume all that old tech produces a lot of heat and as for the smell, that’s just going to happen with a few hundred people in a space playing arcades, if anything it was very realistic to how things were.

If you have even the smallest interest in games or the smallest memory of arcades in their prime then yes without a shadow of a doubt it is worth every penny. You will remember games you had forgotten. You will remember the sights sounds and feel of arcades. Its fantastic and important that places like this exist. To keep the technology going is no small feat, to keep those buttons working, to keep those old CRT screens working it shows that some people do care. Emulation is important but it never feels the same as it used to, this did.

I saw a slightly podgy 40 something year old man. His hair had started to leave his head leaving a wonderful comb over. He had big sweat stains erupting from his armpits. His glasses were very thick, he was not a fashionable man.

However he was playing Outrun and Magical Sound Shower was blasting from the speakers. The grin on his face I think was a grin that he had when he was 10 years old, he was reliving something great and people were stood watching him play nodding approvingly.

For all of the poison around some aspects of modern gaming and social media we can forget how fun it can be. He was remembering that at that exact moment playing Outrun, like I did playing Star Wars.

Some memories deserve to be remembered.

Pub Menu Rating: Cheese Toastie……but a really really good one where the cheese has leaked and gone crispy.
Review by Adam.

As I journey through my own existence gaining wrinkles and bad joints, I still love video games, films and music. I've been podcasting for a few years and now here I am writing things. Who would have thunk it? Thanks for reading and check out all our reviews and shows on the site. Treat yourself.
Review: Lolita Robert Randolph And The Family Band reveal new video