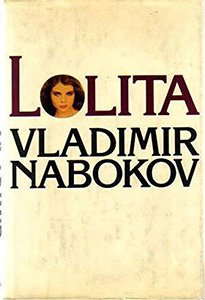 Lolita (1995) is Vladimir Nabokov’s most famous book, and is also, arguably, one of the most controversial pieces of literature throughout modern history. To summarise the plot of this novel the protagonist, Humbert Humbert, falls in love with 12-year-old Dolores Haze aka Lolita. The novel follows Humbert’s story about his love for Lolita and everything he is willing to do/risk to keep her.

The reason why this book is so controversial is due to the fact the novel is about, essentially, a paedophile. However, Nabokov has a way of writing Humbert’s character and experience where you actually feel sorry for him, and almost root for him. Ignoring the fact, he refers to the children he’s attracted to as ‘nymphets’ to almost hide/excuse his attraction to children, it’s the way Humbert describes his past love with a girl named Annabelle which begins the cycle of feeling sorry for him. The way Humbert describes his love for Lolita, (when in reality it’s lust shrouded by love,) that makes you almost root for their doomed relationship. It leaves the reader in an internal conflict of knowing what Humbert is doing is extremely wrong and against the law, but also feeling sorry for him that his love is doomed from the start.

The foreword is written in italics and the first few lines read almost like why Nabokov wrote the novel, which led to many readers skipping this vital chapter, leading them to think the novel was about Nabokov’s life. However, if people actually read the foreword, they would realise it’s just setting up for the story, plus they would also find out the fates of Humbert and Lolita.

A personal problem I have with the novel is that it’s too wordy and doesn’t flow very well, which led me to having to re-read a few sentences to take in what was trying to be said. Nabokov does in the first chapter state ‘you can excuse murder for a fancy prose style,’ but I believe this was taken a bit too far and instead of it reading like an academic (which Humbert is) writing it, it’s like the novel itself hadn’t been edited down to be more fluid.

Another problem I personally have with the novel (by the way, spoiler alert ahead,) is that right at the very end he realises that everything he did to Lolita was wrong, and that he regrets it all. To many this would be a huge sigh of relief, knowing that Humbert has realised the wrong in his doing, but not to me. He had stated many times throughout the book that with other ‘nymphets’ he had been scared to touch them, in case he took away their innocence, but with Lolita that was not the case and it’s like he didn’t care about her or her feelings, that because he had found this reincarnated version of Annabelle, there was nothing wrong with what he was doing.

I would have preferred either Humbert to have kept the same mind-set of ‘not wanting to ruin her innocence,’ or the mind-set of that he deserved what he was doing, because he hadn’t been able to do so with Annabelle, and kept that mind-set that he had done nothing wrong.

Many people may argue with me that the reason he realised his wrong-doings was through meeting Quilty, who was also a paedophile, but to me I would’ve thought that Humbert would view himself as different to him, because he (arguably) genuinely cared and loved Lolita whereas Quilty didn’t care what he did to the children or what he made them do as long as it got him off.

However, despite all the things I believe are wrong with the book, I do think people should read it, despite the criticism that reading it supports paedophilia (which it does not by the way!) Yes, you may get some strange looks off of people if you read it in public because it is known as the book about a paedophile, but the way it gets readers to have inner conflict about how they should feel about Humbert as the handsome villain, or the sad man, I have never seen written in another book before.

It is a literary classic that many have heard about but are ashamed to read, I also think that by reading this book it could not only help the public understand why some paedophiles believe there is nothing wrong in what they are doing. This isn’t the first book ever written about child-love and it probably won’t be the last so we shouldn’t condemn it because of the nature of it.

Overall, Lolita was an interesting read and I would recommend it, (just remember to read the foreword!)

Hi I'm Megan! I like to read books, a lot of books. It was my favourite hobby as a child and has lead me to pursue my dream of becoming an author! I'm a creative writing university graduate, which means I still continue to read a lot. I am also vegan, an environmentalist and am always preaching sustainability. Please enjoy my book reviews and leave me any recommendations!
First Impressions – Detroit: Become Human Review: Arcade Club, Leeds