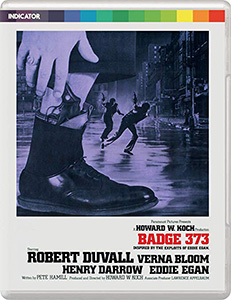 Eddie Ryan (Robert Duvall) is a tough New York city cop who gets suspended after a police bust ends with him being accused of the death a suspect.

Now working as a barman, Eddie discovers that his ex-partner on the force has been killed under suspicious circumstances, which draws him back into a crime ridden world where he will do anything to extract revenge on those responsible for the death of his colleague.

Based on the real-life exploits of New York cop Eddie Egan (who was also the basis for Gene Hackman’s ‘Popeye’ Doyle character in The French Connection and also has a minor part in this too), Badge 373 is a gritty crime thriller where empathy for the characters is hard to give, even with Eddie Ryan, who cares little for what people think about him and only that he ‘gets the job done’.

Politically incorrect in todays society with it’s racist language and attitudes towards women and ethnic minorities, Badge 373 is a product of its time, showing a dark underbelly of New York that, while it still probably exists out of sight today, was all too visible back in the 1970s.

The violence is sporadic but hard hitting…literally! While a scene where Eddie gets chased both on foot and at the wheel of a public bus will most definitely never be forgotten once seen.

The acting various from understated to melodramatic, and while the narrative occasionally seems to wander without purpose, it all comes together at the end for a satisfying finale.

Always overshadowed by ‘The French Connection‘ which came before it, Badge 373 is more than a cash-in on similar themes and is well worth your time, especially if you are a fan of 1970s cop movies.

Review: Time Without Pity Want to buy us a coffee?