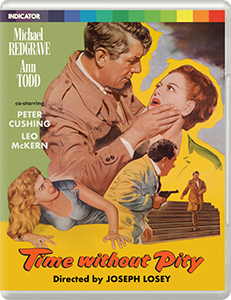 Alec Cowen is on death row after being found guilty of killing his girlfriend in her family home, and it is left to his alcoholic Father to try and prove Alec’s innocence and unravel a suspicious series of events surrounding her death.

Directed by Joseph Losey, with photography by Freddie Francis, a cast which includes Peter Cushing, Ann Todd, Leo McKern, and a BAFTA nominated performance by Michael Redgrave, Time Without Pity has high quality people involved across the board.

The narrative occasionally gets a little sloppy, especially at the end when a huge leap of faith has to be taken as to how someone could be linked to one murder because of another, and the acting can get rather ‘theatrical’ at times with actors portraying their emotions as though they had to reach the back row of a large crowd…Leo McKern certainly chews the scenery with vigour at every opportunity, but overall it is an engaging and involving experience.

Characters lives (and double lives) intertwine on a regular basis, opening new avenues where the fate of Alec varies minute by minute, and even though it seems fairly obvious from the very beginning as to how his fate will play out, the journey to get there has enough going on that it has you rooting for certain characters, while also hoping that others get their comeuppance.

The special features in this Indicator release are, as always, thoroughly entertaining and highly informative.