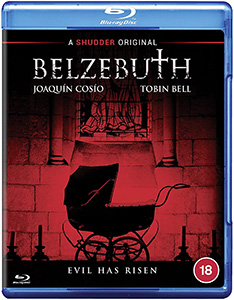 Have you been waiting patiently for the second coming?

Well I’m afraid to inform you that you missed it by over 1000 years!

Fortunately for you though the THIRD coming has already happened, but as always with events such as this in movies, evil forces are never far behind.

Special Agent Emmanuel Ritter (Joaquín Cosio) and his wife tragically lose their newborn son in an opening scene which was genuinely shocking and had me wondering where the hell this narrative was going to go.

More deaths of young children follow just a few years later, and it is left to Ritter to lead the investigation into what is happening and try to solve these crimes.

When a former Vatican priest (Tobin Bell) gets into the mix, it becomes apparent that Ritter and his companions are facing a far bigger battle than they were expecting.

The opening 30 minutes had me enthralled and shocked in equal measure, as the horrific deaths of children were played out in multiple scenes and Ritter’s initial torment was just the beginning of a slow descent into madness for him.

Over the course of the following 90 minutes though, the increased use of below par cgi effects and the overly drawn out narrative lessened the intense emotional feelings that the 1st part of the movie had given me.

There are a few creepy scenes that give the hairs on the back of your neck a workout, but then a ropey cgi effect comes in to spoil the atmosphere…special shout out to some of the worst cgi bloodsplats I’ve seen in a long time.

Belzebuth does have its moments though, and at no point was I bored with it. It’s just that I found the movie to be “okay”, when the 1st act of it had me hoping that it would be far more than that.

If you like your good vs evil possession movies, then there are certainly a hell of a lot worse out there.