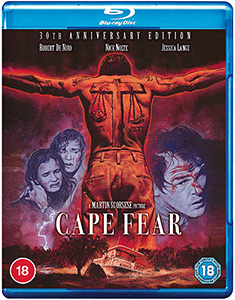 The film tells the story of Cady; a man convicted of rape, who while in prison educates himself which he then uses this knowledge to legally torment his lawyer (Nolte) who suppressed evidence that could have led to a quashed conviction.

Much was made of this movie when it came out, a pumped up De Niro covered in tattoos and the explicit sexual violence and underage grooming.  It’s a very stylised film, the way it looks, the colours and the way it’s cut, huge faces loom in shot while a lot of shots look like the zoom up chair shot in Jaws (you know the one).

Everyone is smoking a LOT, so much so that it did make me think several times that they all needed to get some nicotine patches. Then there’s the acting itself which is very over the top, but unsurprisingly it matches the whole package which is reminiscent of Natural Born Killers, a fantasy based in sexual violence and revenge.

The dialogue is terrible and had me groaning more than once. I hate to admit it as I’m not a big fan but the one shining light for me in this film is Juliette Lewis, she plays a 15 year old, sexually awakened by a rapist murdering nut-job brilliantly, and all without the use of a nice fag.

I couldn’t call this a dated film, literally because it’s so stylised. But if I could only watch one version, I’m afraid I’d pick the black and white one every time.

Picture and sound on this blu-ray makes it the best version I’ve watched, and a fold-out double-sided Graham Humphreys artwork poster is always a welcome addition to any film release.

I used to live in Los Angeles and write about Rock bands. Now I live in wonderful Wales and write about films. I like video games (especially RDR2) and am also a painter...gratuitous plug: follow my art account on Instagram @artbytinar
Review: Belzebuth Review: Maneater – Truth Quest