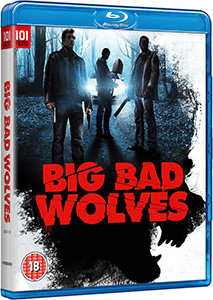 Big Bad Wolves is a nerve jangling, buttock tightening, Israeli thriller that throws pitch black humour and bloody torture at you, all wrapped in a narrative that centres around pedophilia and murder. Sounds like fun, yeah?

While not actually being a ‘fun’ watch, Big Bad Wolves does have some darkly comic scenes which introduce moments of levity into situations that are at times quite horrific, and it’s testament to the script by writers/directors Aharon Keshales and Navot Papushado that I was kept guessing until the very end as to how it may all eventually conclude.

When a series of young girls bodies are found, decapitated and sexually assaulted, suspicion falls upon local teacher Dror (Rotem Keinan), who pleads his innocence and is released by the police, thanks in no part to the brutality of police investigator Rami (Menashe Noy) whose ‘questioning’ of Dror gets him busted down to traffic and eventually suspended.

The father of the latest victim (Tzahi Grad) is distraught when not only finding that his daughters body is missing its head and no-one knows where it is, but also that Rami has allowed Dror to walk away a free man.

So begins a three way battle of wits between the men, which ultimately brings them all together (with the addition of the victims badass Grandad) in a bloody finale in which lies become truths, and truths become lies…complete with broken bones, scorched flesh and plenty of screaming.

Following several narrative beats from Prisoners (one of my favourite Hugh Jackman movies, and one which a lot of people I talk to haven’t seen) Big Bad Wolves ramps everything up an extra notch to where certain scenes elicited a genuine sharp intake of breath…that’s what pulling toe nails out with pliers will do!

However, Big Bad Wolves is far from being a gore film, don’t go into this thinking that it will be Hostel or Saw 3, the characters here are more rounded and you feel more empathy for them…despite the things that they are driven to do to other people.

Big Bad Wolves is available to buy from 19th August 2019.