Review: Crack in the World 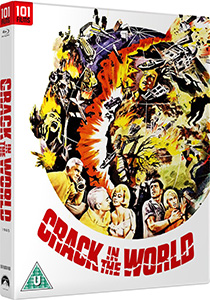 Despite warnings from his fellow scientists, Dr. Stephen Sorenson (Dana Andrews) plans to use the geothermal energy from the Earth’s interior by detonating a thermonuclear device deep within the Earth’s core. Think of it as ‘extreme fracking’.

Of course things don’t go exactly as planned and a huge crack appears, which begins to expand and threatens to split the entire planet in two unless a solution can be found in time.

Made in 1965, Crack in the World features fantastic effects for the time, with some glorious miniature model work, while the narrative hooks you in from the beginning and keeps ramping up the tension as the earth threatens to tear itself in two. Volcano’s, tsunami’s, and other disasters all begin to happen with ever more frequency as the desperate team of scientists try to figure a way to save the world.

Much like the majority of sci-fi movies of the 50’s and 60’s, the actual science behind this has been debunked with the discovery that the earth isn’t just covered in one huge crust, but in fact is comprised of many moving tectonic plates.

However, being realistic is never at the core (pun not intended) of most sci-fi movies, and while this may not be scientifically accurate, it is certainly high on tension and keeps you gripping your seat all the way through.

Released on Blu-ray for the 1st time and once again (much like The Colossus of New York) featuring an entertaining and informative commentary with film historians Allan Bryce and Richard Hollis, Crack in the World is another great sci-fi release from 101 Films.