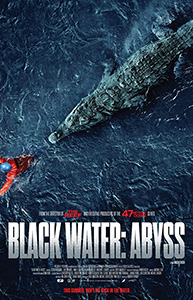 Five friends go off on an adventure trip to a remote cave system in Northern Australia, and while deep in the caves get trapped when a heavy storm floods their exit and they find themselves struggling to escape as the water level rises.

Drowning isn’t their only danger though, as also in the caves with them is a large crocodile that is hungry for human flesh.

‘Killer croc” movies are nothing new and there is only so much that you can do with them, but while Black Water: Abyss is nothing new in the originality stakes, it at least has a few moments of tension…however far apart those moments might be.

There is a “soap opera” love entanglement between the characters, which comes as no surprise whatsoever and also does nothing to make you care more for their inevitable fate. While the “action” is minimal and never raises any involuntary whooping or hollering while you watch.

The end sequence gave something a little more than was expected, but ultimately any empathy for the characters had long since been eroded.

While not a “bad” movie per se, Black Water: Abyss never rises above mediocrity. Which is a shame as I really wanted something with a lot more bite (pun fully intended).

Review by Dave from a streaming link kindly supplied by Fetch Publicity.