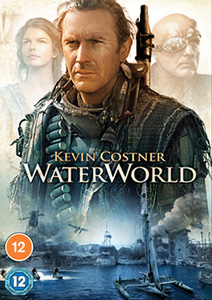 A box office bust on its release in 1995, Waterworld has thankfully come to be re-evaluated over the previous 25 years and is loved a lot more by cinephiles worldwide, though I’ve always enjoyed it since going to the cinema to watch it all those years ago.

In a future where the polar ice caps have melted and the earths surface is covered in sea water, pockets of humanity are split into different societies and attempt to survive by whatever means possible.

Sailing alone is “Mariner” (Kevin Costner), a man comfortable with his own company but who reluctantly has to care for a woman and her young daughter, all while being pursued by Deacon (Dennis Hopper) and his gang of outlaws.

The young girl could hold the secret to where the last remaining piece of dry land might be, and so everyone wants a piece of her.

Waterworld certainly got the “shit end of the stick” as far as reviews went back in 1995, mostly due to the fact that its original budget of $100M spiralled to $175M and it underwent a series of production difficulties…not surprising really for a movie predominantly filmed on water.

However, Waterworld is, and always has been, ENTERTAINING.

Spectacular action sequences are never far away, while the whole movie is flavoured with a good dollop of cheese, which Dennis Hopper gleefully eats up and regurgitates in a spectacular performance as the movies antagonist Deacon.

If you’ve never seen it before then do yourself a favour and give it a watch ASAP, and if you haven’t seen it for quite a while, then a rewatch is just as enjoyable.