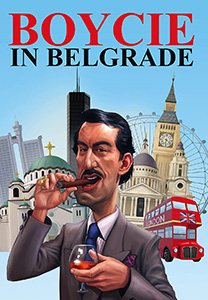 Aubrey ‘Boycie’ Boyce has been on our screens now for 40 years, and is one of the very popular characters in the worldwide hit sitcom Only Fools and Horses, as well as it’s spin-off series The Green Green Grass.

Portrayed by John Challis, Boycie, along with his long suffering wife Marlene and the rest of the gang from Peckham, have been warmly embraced by an audience of millions across the globe, including huge popularity in Serbia.

It is to investigate this popularity that John Challis visits Belgrade and meets a plethora of people all wanting to get up close and personal to one of their screen heroes.

Intercutting with humorous anecdotes by John Challis, we are taken on a journey to accompany John as he visits a diverse selection of locations, including a Royal Palace, a brandy distillery (where he tries the various types being made there), gets in front of an English class, and of course has to visit a few cars…including one which may well look very familiar to you.

While it was good to see John drop into the character of Boycie at certain moments, the charm of this is seeing John as himself interacting with everyone. His good humour and amiable manner shine through…as I can attest to when I spent a wonderful 15 minutes with him chatting about this documentary the other month, only to later find that the recording was corrupted and unsalvageable.

Not just for fans of Only Fools and Horses, this is a travelogue that anyone can enjoy.