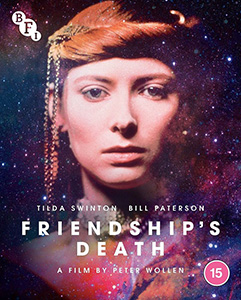 I’ve never come across Friendship’s Death before and on reading the synopsis I immediately got the feeling it would be an hour long art-slog. And although it can be placed in the ‘arty’ box, it’s also an intriguingly good watch.
Written and directed by the late English critic and film theorist Peter Wollen (his only film as sole director), it is a two-handed tale featuring Bill Paterson as Sullivan, a grizzly, whiskey loving journalist more or less captive in a hotel in Amman in Jordan in 1970s during the civil war and the ‘Black September’ period of PLO hijackings, and Tilda Swinton as ‘Friendship’, who appears one day in his room, with no papers and nowhere to go.
Swinton and Paterson are always watchable, and this early (1987) coupling is perfect. Paterson, world weary is still attractive and Swinton is almost an ethereal ‘Man Who Fell to Earth’ mixed up with Scheherazade, as she reveals herself to be a robot from an alien planet sent here to land in America to promote peace.
He doesn’t believe her…at first, but on finding something ‘alien’ snooping about in her room, he begins to question and treat her as an alien entity.

It’s a short film, and I suppose sections of it can be seen as wordy for showing off sake, but there’s something about this film, it’s funny, not laugh out loud, but gently comedic in the alien’s views of, for instance, football.
The extra’s on the disc really added to my enjoyment of the story, seeing Paterson and Swinton meet again via Zoom and discuss making it is a joy, and being a huge Frida Kahlo fan, the addition of a 30 minute documentary about her with Tina Modetti was wonderful.
This film isn’t what you think it’s going to be. It’s better.

I used to live in Los Angeles and write about Rock bands. Now I live in wonderful Wales and write about films. I like video games (especially RDR2) and am also a painter...gratuitous plug: follow my art account on Instagram @artbytinar
Spotlight Reflection: BMX Bandits Review: Boycie in Belgrade