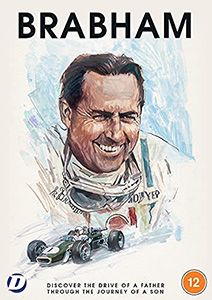 Jack Brabham remains the only person to have won the F1 Driver’s and Constructor’s Championships in his own car and is a true motorsport legend.
Taking on and defeating the giants of Ferrari, Lotus and Maserati are only a small part though of the life of Jack Brabham, his racetrack successes (and disappointments) being shown alongside his personal family battles that took place away from the racetracks worldwide.
Featuring archive footage (both on the track and away from it) from throughout his career, as well as interviews from a variety of people who worked with and competed against him, ‘Brabham‘ shows that there are always battles to win in life.
Having been a big fan of Formula 1 racing throughout the 1970s and 80s, any documentary about the history of it always gets my attention, and it was fascinating to see what Jack Brabham achieved during his career, while also having an inside look into what was happening in his personal life at that time too.
It would have been more enjoyable to have had a more linear storytelling experience instead of 84 minutes of jumping back and too throughout various points in his life, plus there were certain moments that I would have loved to have spent more time with and gone more in-depth about, but as an initial point for anyone wanting to know about a racing legend, then this is as good a place as any to get onto the starting grid about his life.
Review by Dave from a streaming link kindly supplied by Dazzler Media via The Warrior Agency.

Review: Don’t Look Back Review: The Best of Men