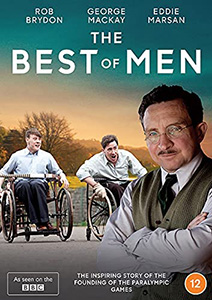 Based on the true story of the birth the Paralympic Games, The Best of Men stars Eddie Marsan as Dr. Ludwig Guttmann; a refugee doctor from Nazi Germany, who towards the end of WWII arrives at Stoke Mandeville hospital and is disgusted to see the way in which the partially paralysed British war casualties are kept sedated and immobile.

Clashing with hospital staff and British military ‘big wigs’, Guttmann brings in new equipment and a new regime of physical activity, much to the annoyance of the bedridden soldiers who have become accustomed to their sedentary post-war life in the hospital.

It soon becomes apparent though that Guttmann has everyones best health at heart, and his long working hours and dogged persistency in following through with his ideas has everyone appreciating what he does, culminating in the genesis of today’s Paralympics.

A heartwarming and life affirming true story, The Best of Men has great performances by Marsan as the good Doctor, along with a wonderful cast which includes Rob Brydon as a Welsh soldier who is initially very reluctant to embrace the new ideas, but who eventual blossoms because of them.

Ending with a little flash-forward to today’s Paralympics in the end credits, The Best of Men is a very pleasant way to spend 90 minutes.

Review by Dave from a streaming link kindly supplied by Dazzler Media via The Warrior Agency.

Review: Brabham Chivalry 2 will Double in Size for Free