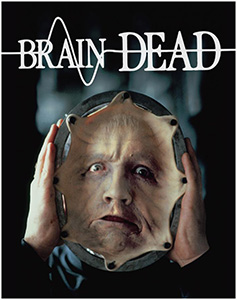 Dr. Rex Martin (Bill Pullman) is a top neurosurgeon, who surrounded by brains in jars, is studying brain malfunctions that cause mental illnesses. His friend Jim Reston (Bill Paxton in fine manic form) is a businessman at ‘Eunice’ and comes to see him. Jim needs help in delving into the mind of John Halsey (Bud Cort, also manic), a genius mathematician who once worked for Eunice and is now in an insane asylum.

Are you following? Great.

Halsey destroyed his ‘results’ before losing his mind and the company think he’s making up his ‘madness’ to keep the information out of their hands.

Rex meets with Halsey, and he tells him a man named Conklin is spying on him and intends to kill him.

Shall I continue? Hmmmm.

Produced by Roger Corman and written by  Charles Beaumont who had been one of the regular writers on the original The Twilight Zone from the early 1960’s and had later written scripts for several of Roger Corman’s Edgar Allan Poe films. It appears that this script was one that had been in Roger Corman’s possession for several years before he made it into a film.

It’s so 80s, very Lovecraftian and If I didn’t know better I’d say Brian Yuzna directed it. But he didn’t and it may have been a better more (weirdly) coherent film if he had. I found myself wondering what the hell was going on most of the time!

Now that may sound like I didn’t like it, but I did. It’s confusing, bonkers and ultimately very watchable. Bill Paxton is a joy to behold in anything and seeing a young Bill Pullman doing horror is unexpected. Couple that with a really great package from 101 Films  and you’re on a winner.

I used to live in Los Angeles and write about Rock bands. Now I live in wonderful Wales and write about films. I like video games (especially RDR2) and am also a painter...gratuitous plug: follow my art account on Instagram @artbytinar
Review: I, Monster Interview: “Alone”