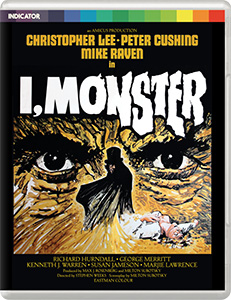 Directed in 1971 by a very young (only 22) Stephen Weeks as his feature debut for Amicus Productions. Interestingly Amicus usually made vignette films, multiple stories in one film, but this time opted for a a full length adaptation of Robert Louis Stevenson’s ‘The Strange Case of Dr. Jekyll and Mr. Hyde’ (but the names are changed to Marlowe and Blake).

Christopher Lee, who we normally associate with Dracula, gives an almost reserved ‘English Gentleman’ performance as the conservative Dr Marlowe, and this is well contrasted by his almost childlike personification of evil alter ego Edward Blake (Hyde). I kept hoping for a transformation scene to see the disintegration of his face and character as his vices take control and Blake overwhelms any goodness left in Marlowe. Peter Cushing has a smallish part playing Marlowe’s friend Utterson and is the moral compass of the story.

It’s obviously low budget but is one of those great British horrors, and does have a few grisly (though you don’t actually SEE anything) scenes in it. It’s all done by suggestion, and works really well.

Indicator have again produced a comprehensive set of extras on this disc, the new commentary with director Weeks is fabulous as are all the other extras, of which there are many as it really is a packed to the hilt release.

I used to live in Los Angeles and write about Rock bands. Now I live in wonderful Wales and write about films. I like video games (especially RDR2) and am also a painter...gratuitous plug: follow my art account on Instagram @artbytinar
Review: Eve Review: Brain Dead