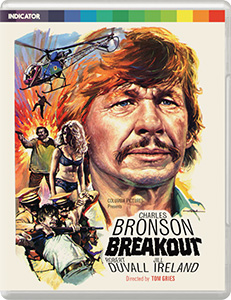 Based on a true story by Joel Kaplan, who broke out of a Mexican jail after being framed for murder, Breakout is a fun action movie where you get to see (amongst other things) Charles Bronson get to flex his comedic muscles, as well as Randy Quaid dressed as a Mexican prostitute in full make-up. That should be an instant buy right there!

Jay Wagner (Robert Duvall) is framed by the mob and sent to a hellhole Mexican prison while his wife Ann (Jill Ireland) tries desperately to get him released. This leads to her paying Nick Colton (Charles Bronson) $50,000 to concoct an elaborate plan to break him free.

Light on action, but heavy on enjoyability thanks to the performance of Bronson, who seems to be relishing playing a less ‘serious’ character (he even cracks a few smiles!), Breakout’s narrative rolls along at a frantic pace until the set-piece finale where Colton flies a helicopter (after only minimal lessons) into the very heart of a Mexican prison full of gun toting guards.

Much like in The Last Detail, Randy Quaid shows that his early acting performances were far removed from the parts that he would play in later life. A shame really, as once again he is completely engaging onscreen.

As a lightweight action comedy, Breakout ticks all the right boxes, with the added bonus of a great cast and a ‘WTF!?’ moment involving a man and a plane that will have you immediately skipping back to watch it again.

A welcome change of pace from Bronson away from the ‘tough guy’ roles that would define his career.

You can buy  Breakout by clicking HERE. ALL money raised by purchasing from Amazon via our website is given back to our listeners and followers in upcoming competition prizes. The more people buy, the bigger our prizes.

(Remastered) Spotlight on: Best of the Best Review: Till Death Us Do Part