Review: Till Death Us Do Part 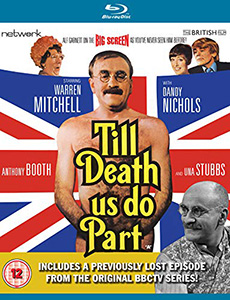 Making movie versions of popular UK television comedy series was very popular from the late 1960’s and through the 1970’s, with various degrees of success not only at the box office, but also in the quality of the scripts. Can a 30 minute show be stretched to over 3 times its length and still maintain a reliable ‘laugh quota’?

3 years after its television debut, original creator and writer Johnny Speight penned this movie version of Till Death Us Do Part, which would bring back the curmudgeonly Alf Garnett (Warren Mitchell), his long suffering ‘silly moo’ of a wife Else (Dandy Nichols), their daughter Rita (Una Stubbs) and her Scouse boyfriend/husband Mike (Anthony Booth), along with a cast of characters played by a who’s who of actors including Brian Blessed and Bill Maynard.

The movie is surprisingly split into 2 distinct parts; the 1st 50 minutes concentrates on Alf and Else’s early life, starting before the beginning of the 2nd World War, and then moving along in increments until 1948 when they now have a baby daughter and the war has finished.

The story then jumps forward 20 years to 1968 for the final 50 minutes, where plenty has changed, yet Alf still remains set in his ways and refuses to move with the times. He steadfastly refuses to accept a compulsory purchase order from the council for his house, and watches as everything (literally) crumbles around him.

Growing up in the 1970’s, Till Death Us Do Part was a big part of my television viewing. Watching as my Dad laughed at some of the jokes that went over my head as a child, I was always transfixed and highly amused whenever Alf lost his temper. Which was usually every few minutes, much to my hilarity. Revisiting it now it has lost none of its appeal for me: Alf’s temper is still hilarious, Else’s put downs of him are still as scathing, Rita’s polar opposite views to her Dad still form some great scenes, and Mike’s deliberate ‘winding Alf up’ comments are still responsible for some of my biggest belly laughs.

While the 1st half certainly sets up the characters for those who may be unfamiliar with the television show, and also fleshes out their backstory for those who are familiar with them, it is the weakest part of the movie. Having said that, moments such as Alf sat in his outside toilet (who remembers those?…I do!) chatting with his next door neighbour Bert (Bill Maynard) before glancing at the ripped pieces of newspaper beside him to use as toiler paper and seeing Adolf Hitler’s face on it waiting to be wiped on his bottom, sure as hell tickled the same childish funny bone still inside of me from all those years ago.

The familiar territory of the Garnett living room in the latter part of the movie instills a sense of nostalgia and familiarity for longtime fans of the show, and is where the script really begins to excel as it concentrates on the 4 main characters and is not distilled across as many people as earlier in the narrative.

I’m not sure how the humour will translate to younger generations who didn’t grow up with the Garnett’s (but I do encourage them to give it a watch), however, for those of us of an age to smile whenever you hear “it’s your bloody West Ham innit”, this is a walk down memory lane that will have you smiling and laughing all the way down it. It has also never looked so good too thanks to a great Blu-ray transfer which makes it look like it was shot yesterday.

You can buy Till Death Us Do Part by clicking HERE. ALL money raised by purchasing from Amazon via our website is given back to our listeners and followers in upcoming competition prizes. The more people buy, the bigger our prizes.

Review by Dave (host of 60 Minutes With) from a disc kindly supplied by Blue Dolphin Films from Network on Air.

@TomKeiferMusic Hi Tom, I would have been watching you at @Tivoli_Venue next Friday if not for the pandemic. If you have any time spare, I'd love to record a show with you: 60minuteswith.co.uk/interview… Been a fan since buying Night Songs in 1986.