Review: Bring Me the Head of Alfredo Garcia 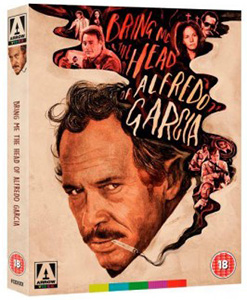 On one hand, it’s a bit jarring to see Sam Peckinpah’s notorious Bring Me the Head of Alfredo Garcia (1974) so lovingly packaged on two discs with an accompanying booklet and a host of extras. After all it’s a film which seems to go out of its way to be disliked, a disorientating, tequila-soaked fever dream which even its defenders damn with faint praise – Terence Butler called it ´the worse directed great movie of all time`. The initial reviews were poisonous: The Wall Street Journal called it ´grotesque, sadistic, irrational, obscene, incompetent` while New York magazine regarded it as ´a catastrophe`. Decades later it remains too much for many, marking the moment when a great talent came undone through alcohol-fuelled madness. It is still perhaps the only film where we see the ostensible hero wake up in the morning and try and drown his pubic lice by pouring tequila over his crotch. But then again this is, as the man himself said, ´pure Peckinpah`, an intensely personal slice of demented autobiography and the only one of the director´s films not to be compromised or mutilated in one way or another and as such it surely deserves such a beautifully put-together release.

The film is a kind of gothic take on The Treasure of the Sierra Madre (1948) and tells the story of Bennie (Warren Oates wearing Peckilnpah’s shades), a washed-up pianist adrift in Mexico. He is approached by a couple of hit-men who are seeking Alfredo Garcia, the man who knocked up the daughter of the sinister patriarch El Jefe. Bennie finds out from his prostitute girlfriend Elita (the luminous Isela Vega) that Garcia has died in a car crash – and also discovers that she cuckolded him with Alfredo. Bennie and Elita set off on what she thinks is a road trip but in fact it’s his attempt to make some money by digging up Alfredo and cutting off his head. But his plan goes horribly wrong, Elita ends up dead and Bennie goes out to seek revenge, accompanied by the rotting, fly-blown head.What could’ve been simply a lurid south-of-the-border thriller becomes something far stranger and more deranged through Peckilnpah’s approach. There’s the odd framing, the jagged, sometimes confusing editing and the parade of bizarre characters including gay hit-men, a couple of Manson-ish bikers (one of whom threatens Elita in what for many is the film’s most troubling scene) and the sinister company men who sneer at Bennie in his shades and clip-on tie. The latter represent the bland but destructive suits that Peckinpah despised, the politicians responsible for the war in Vietnam and the producers and studio brass who blacklisted him and mutilated his films. Indeed, Helmut Dantine’s icy Max can be seen as a version of James Aubrey, the head of MGM who had slashed both the schedule and the budget on Pat Garrett and Billy the Kid (1973). Bennie gunning down Max is clearly an act of wish-fulfilment on the director´s part (and the fact that Dantine was doubling up as a producer on Alfredo Garcia must have made this moment all the sweeter).Tricky Dick Nixon himself, the face of this sleazy corporate Amerika actually makes a couple of cameo appearances, appearing as a caricature on a dollar bill pinned to the wall the first time we see Bennie and later on the cover of a magazine read by one of El Jefe’s men.

And then there’s Warren Oates, a Peckinpah regular here cast in one of his few lead roles. He liked to describe himself as “a little shit” and indeed, Bennie is a born loser, scruffy and hopeless (notice how he wears his shades in bed but not while driving in bright sunshine). He’s surprisingly charming in his scenes with Elita and their scenes together are very sweet – the fact that these tender moments occur while they’re on their way to dig up the body of one of her ex-lovers speaks volumes about the dark, bitterly ironic world of the film. Oates is so good in the role, it’s strange to consider that he only got the part because Peter Falk couldn’t get the time off from Columbo.

Throughout, Peckinpah blends the perfunctory and the dazzling, sometimes in the same scene. There´s the mis-matched lighting, the (deliberately?) phony day-for-night photography and the cavalier use of the director’s signature slow-motion (at one point we get a shot of a bus going through a puddle!). But there are also the strange, memorable touches – note how when Bennie first hears Alfredo’s name, there’s the sound of a car crash from somewhere far away and there’s that haunting slowed-down shot of Elita falling back into the grave.

Aside from the style, the tone may be equally off-putting to some. As well as the sweat, the flies, the pubic lice, the blood and the rivers of booze, this is a very dark vision – Mexico is a hell-hole, life is cheap and women are there to be brutalised (as Elita tells Bennie as she is led off by the rapacious biker, “I’ve been here before and you don’t know the way.”) In a very telling moment, Bennie leaves the mansion after killing El Jefe and remembers to take the head – “Come on, Al, we’re going home” – but almost forgets the money, supposedly the reason he embarked on this death trip in the first place.

This Blu-Ray is probably the best the film has ever looked. In the opening scenes with El Jefe’s daughter sunning herself by a lake and then being taken into his mansion, the contrasts are much greater than they were on previous DVD releases, the shift from bright sun to gothic gloom summing up what we’re in for. Some of Peckilnpah’s stylistic shoddiness remains (note how in the picnic scene where Bennie and Elita talk about marriage the sky we see over his shoulder actually looks dirty). But there’s surely a limit to how much one can – or indeed, should – clean up such a scuzzy film? The accompanying booklet contains a couple of perceptive new essays and re-prints of two Film Comment pieces, one on the film and the other on Oates.

The real jewel amongst the extras is Paul Joyce’s Sam Peckinpah:Man of Iron, a feature-length documentary shot for the BBC which has proved hard to find ever since a 1992 TV screening. Perhaps the best documentary on the director it contains interviews with actors (Jason Robards, Kris Kristofferson), directors (Monte Hellman) and members of his extended family. There are also hours and hours of out-takes on a bonus disc and some new material including an introduction by Joyce and a new interview with David Warner.

There’s also an audio recording of the director giving the John Player lecture at the National Film Theatre. Sam is genial and good-humoured – when asked how he got the dramatic bullet hits for the climax of The Wild Bunch, he says they just ´shot the actors`.

There are also a couple of informative commentaries, one with Stephen Prince and the other with Paul Seydor, Garner Simmons and David Weddle. The latter wrote arguably the best book on the director, If They Move, Kill ´Em: The Life and Times of Sam Peckinpah. The chapter on Alfredo Garcia is appropriately titled Into the Abyss and going into that abyss has never been as tempting a prospect as it is here…

For more information and stories from Bring Me the Head of Alfredo Garcia, please buy the book by Ian Cooper which is available from Amazon and all good book retailers.