Review: Bullfighter and the Lady 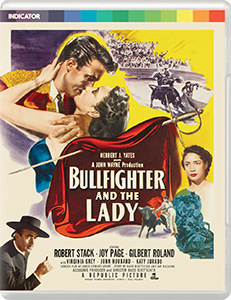 While I abhor bullfighting, I recognise its place in the culture and history of different countries. Your views on bullfighting will colour your enjoyment of Bullfighter and the Lady, especially in the longer (and recommended) 124 minute version included in this release which features a lot more actual bullfighting.

American clay pigeon shooter Johnny Regan (Robert Stack…a blonde Robert Stack no less!) becomes obsessed with bullfighting while visiting Mexico, and under the tutelage of renowned bullfighter Manolo Estrada (Gilbert Roland) wants to fulfil a newfound dream of stepping into a bullring and facing off against horned adversaries.

Throw into the mix the usual love interest…in this case a friend of Manalo’s; Anita (Joy Page), and all the ingredients are there for some onscreen fireworks.

Produced by John Wayne, and based in part on director Budd Boetticher’s experiences as a novice bullfighter, Bullfighter and the Lady kept my interest across all of its 2 hour plus running time, with interest particularly peaked during scenes when Robert Stack isn’t replaced with a stunt double and does indeed do some actual bullfighting…even taking a tumble a few times too.

The narrative twists come as no real surprise, but I was invested enough in the characters to care for what happened to them…despite Johnny Regan being his own worst enemy most of the time.

The audio commentary with critics and authors Glenn Kenny and Farran Smith Nehme is interesting and informative, while the rest of the special features help to flesh out more about the history of the movie and bullfighting.

There’s a lot of footage of bullfighting (especially in the longer version) so if that offends you then this isn’t a movie to watch, but apart from that there’s a decent love/drama story to keep you entertained.