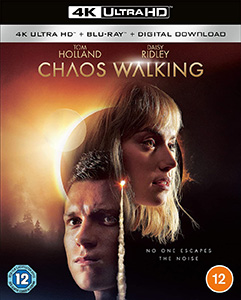 Chaos Walking, ah yes that troubled film starring Spiderman and the Emperor’s granddaughter has at last appeared. Made in 2017 and due for release in 2019, this is finally being released on all platforms it seems, as a plug because not many movies are available.

Directed by Doug Liman and based on Patrick Ness’s science fiction trilogy Chaos Walking, it tells the story of a futuristic dystopian world and follows a young man Todd (Tom Holland) and young woman Viola (Daisy Ridley) who crash lands on Todd’s planet.

So the big thing about this story is: ALL men’s thoughts are heard out loud. There is constant narrative in the air as they can’t hide their innermost thoughts which they call ‘The Noise’. However, the women  – they don’t have this problem. All their thoughts are private.

Todd lives in a settlement which has no women, and is ruled by Mads Mikkelsons Mayor Prentiss…who can make a big orange coat look sexy.

Blurb for the film leads you to believe that there are NO women on this planet, this isn’t the case, the next town has a women, men and children, and it soon becomes apparent that the mayor is evil and …. What did he DO to all the women to stop them hearing?

There have been a LOT of negative reviews around this film. In truth the constant men bickering didn’t get on my nerves at all, and it has somewhere deep inside it, the makings of a good scifi film. The problem seems to be a few gaping plot holes and the fast jog to the end.

We were lucky enough to have the 4K release to review and the sound and picture were incredible. This is a great fun film for kids, with just enough monster action to keep them on their toes. Oh and NO snogging which is always a plus.

Chaos Walking is available to download now and on DVD, Blu-Ray, 4K and Steelbook on 31st May.

Review by Tina from a UHD 4K blu-ray kindly supplied by Lionsgate UK via Way To Blue.

Review: The Stylist May 2021 Decade of Decadence