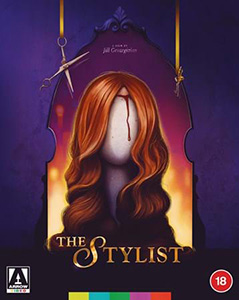 Based on the short film of the same name by writer/director Jill Gevargizian, The Stylist tells the story of Claire (Najarra Townsend) who is a solitary  hairdresser working in a small salon somewhere in America.

As she cuts her clients hair she drifts off imagining what their lives must be like, and if she finds their lives desirable, she arranges for them to have a late haircut, drugs them, scalps them and wears their hair in front of her mirror at home, repeating whatever they said to her.

When Olivia (Brea Grant) comes to her salon asking for bridal hair, Claire seems to fall in love with her, and attempts to give up her hair raising (sorry) antics, to no avail.

This is quite a ‘moody’ film (as in sulky) with long periods of silence, and the performances are rather one sided and wooden (particulary the star who is monotone throughout).

It does look and sound good, but this doesn’t detract from the plot holes (what does she do with all those bodies? WHY isn’t she covered in blood? Do I care? No I don’t).

The ending…. yes one of ‘those’ endings. The one you can see coming from 89 minutes away. It’s such a shame to wrap it up in such an expected bow, which unfortunately did make me regret the last 88 minutes of viewing.

I used to live in Los Angeles and write about Rock bands. Now I live in wonderful Wales and write about films. I like video games (especially RDR2) and am also a painter...gratuitous plug: follow my art account on Instagram @artbytinar
Review: King of Seas Review: Chaos Walking UHD Blu-ray