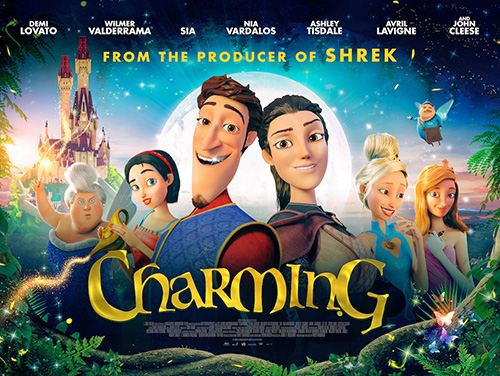 Prince Philippe Charming has a problem. Every woman he meets falls head over heels in love at the very sight of him. ‘Why is this a problem?’ I hear you say. Surely every man would love women to fawn over them? The issue is that all the men in the kingdom don’t appreciate their wives or girlfriends falling under the spell of a pompous ass! This makes Prince Charming a target and he has to be under constant protection. The situation gets worse as he finds himself engaged to not just one princess, but three, with Snow White, Cinderella and Sleeping Beauty all falling under his spell.

Prince Charming isn’t really at fault as he was cursed as a baby to be adored by every woman who lays eyes on him. The curse will be broken on his 21st birthday but, (there’s always a but) love will also die for everyone else. The only way to break the curse is for him to embark on a quest to find his true love and seal it with a kiss. Prince Charming is escorted by Lenore, a thief who is seemingly immune to his charms, but also hates his guts. Will evil prevail or will Philippe and Lenore fall in love and save the day?

I’ll be perfectly honest and say that I wasn’t holding out much hope for Charming however, I was pleasantly surprised. I enjoyed the twist on traditional tales of princesses being saved by Prince Charming, and it was actually him that needed saving from his own curse.

My wife and I sat down with our 7-year-old daughter and were gently entertained throughout. There were some funny moments and we enjoyed spotting some nods and winks to other Disney inspired fairy tales.

The animation was good and there were some original songs that were fine, if not particularly memorable. Charming features the vocal talents of Demi Lovato, Nia Vardalos, Ashley Tidsale, Avril Lavigne and John Cleese (briefly) who all do a decent job.

As I mentioned before when I reviewed Birds of a Feather, there are a lot of animated movies released at this time of year to capitalise on the school holidays. Charming is one of the better ones and has a nice central idea. It felt like a mixture of Shrek and Tangled, and this is my main problem with the movie. Although it has a good idea, it still didn’t feel very original, and replicates characters you’ve seen before in other/better animated movies.

Despite its best efforts, it’s unlikely that Charming will be a movie we revisit in the future. That’s not to say it’s bad. It was certainly fun enough and a decent way to spend an hour and half. But if I’m being brutally honest, we will probably stick to the more tried and tested classics it is trying to emulate.

Charming is available in cinemas now.

Review by Chris from a streaming link kindly supplied by Witchfinder.

I love video games and movies as much as I love my children. However, I'd rather face off against the worst end of level boss, and watch the scariest horror movie than visit another soft play! Thanks for taking the time to visit the website and read this review. Please send any complaints to Dave and any money to me!
ClintCast: A Fistful of Dollars Review: The Chant of Jimmie Blacksmith