Review: The Chant of Jimmie Blacksmith 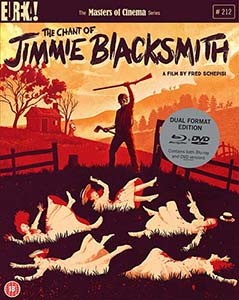 Based on the novel by Thomas Keneally, The Chant of Jimmie Blacksmith is a hard hitting story set at the end of the 19th century, about a young indigenous man pushed to his breaking point and beyond.

Jimmie Blacksmith (Tommy Lewis) is an Aboriginal half-caste and caught between the poor and alcohol fuelled world of his tribe, and the more sedate and strict education given by the Methodist Minister Rev. Neville (Jack Thompson).

Despite working hard and being respectful to everyone that he meets, Jimmie is met with constant verbal and physical abuse from the white community, and in an effort to gain more respectability, Jimmie finds Gilda (Angela Punch McGregor), a young white woman whom he beds (well, shags up against a shed wall to be perfectly honest) and forms a relationship with while travelling the country making fences at various households.

When finding out that Gilda is pregnant, Jimmie asks her to marry him and proceeds to build a small wooden home for them both to live in while he continues to work making fences.

The birth of his child is the tipping point of his sanity, and so begins more harrowing experiences for Jimmie, this time with him being on the giving end of the verbal and physical abuse.

The Chant of Jimmie Blacksmith is a hard, yet thoroughly engaging, viewing experience. The abuse that Jimmie (and all of the indigenous people) takes from the over privileged white community gives you a real empathy for his character. This empathy however is pushed to its very limits when he can take no more and begins to extract revenge on all (and more besides) who have wronged him.

There is one particular scene involving a couple of axes (I’ll say no more so as not to spoil it) that is truly shocking…and this is coming from someone who is not easily shocked.

The tone of movie is dark throughout its 2 hour running time, with few moments of levity to lift the overpowering feeling of oppression. It is not however a depressing movie, and at no time was I ever tempted to even glance at how long was left. This is a dark story that draws you into its heart as the narrative gets ever darker.

If I was to voice one complaint about The Chant of Jimmie Blacksmith, it would be that I found the score to be too loud and too overdramatic and I would have loved the use of more traditional aboriginal music in it. That is just a small gripe, and I would definitely recommend this great Blu-ray for anyones movie collection.

The Chant of Jimmie Blacksmith will be released on 26th August 2019.

Review by Dave from a disc kindly supplied by Eureka.