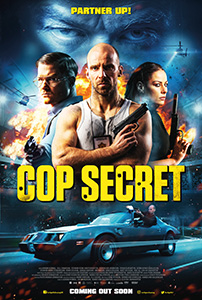 Tango and Cash, Murtaugh and Riggs, Starsky and Hutch; all names you’re more than likely familiar with thanks to their exploits in cinemas and on television screens worldwide.

You can now add to that list Bússi and Hörður: a couple of Icelandic cops whose relationship goes deeper (very deep in fact, going from the look on Bússi’s face in one particular scene) than any of the aforementioned onscreen cops.

Bússi (Auðunn Blöndal) is Reyjavik’s top cop, a maverick who plays by his own rules and often leaves a trail of destruction behind him, much to the chagrin of his “by the book” partner Klemenz (Sverrir Þór Sverrisson).

Across in the neighbouring town of Gardabaer, Hörður Bess (Egill Einarsson) is the suave, muscular cop who who takes down criminals without breaking into a sweat.

When Klemenz refuses to work with Bússi anymore, Hörður is brought in to partner Bússi and try to solve the mystery of why multiple banks are being busted into by a gang of criminals, yet no money is ever stolen from them.

This new partnership doesn’t go down well with Bússi, who doesn’t want the spotlight taken away from him now that he has a partner who is more than capable of matching his every move…and who he is also beginning to fall in love with.

Yes, macho man Bússi has been repressing his homosexual feelings for a long time, and when the proudly pansexual Hörður is up close and personal with him while they are working on the bank robberies case, he finds it difficult to keep them under control.

Their burgeoning relationship is at the core of this wildly entertaining and humorous homage to all the cop movie tropes we have come to love over the years. Crazy car chases, not so subtle one liners, shoot outs and an evil bad guy…one so evil that he speaks in English instead of Icelandic, because all movie villains are British right!?

Director/co-writer Hannes Þór Halldórsson (former Iceland national team football goalkeeper making his directorial debut) keeps everything playing out at just the right pace and nailing the tongue in cheek humour perfectly, never going over the top with it in a manner similar to Police Squad, but skilfully combining subtle moments such as a brush of the hands which raises a knowing smile while watching it, through to balls out belly laughs when Bússi and Hörður try to outdo each other in a shootout, or one particular naked scene that would have made the shower sequence in Tango and Cash very different indeed.

Cop Secret fires two big guns of fun into the buddy cop genre, then gives it a big loving kiss on the lips before playfully slapping it on its arse and winking to the camera.

The more familiar you are with buddy cop movies, the more each playful nod to camera will entertain you, though this isn’t a prerequisite for enjoying Cop Secret, as the action and humour is there for everyone to enjoy.

One trope from these types of movies that I hope is also copied is going on to become a trilogy, as I for one want to see more of Bússi and Hörður, especially now that they are…well, you’ll have to watch to find out.

Cop Secret is released on digital platforms May 23rd.

Review by Dave from a streaming link kindly supplied by Vertigo Releasing via Fetch Publicity.