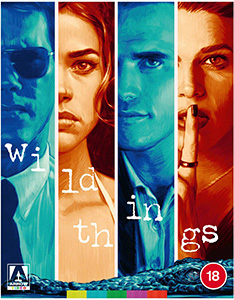 Alas, they don’t make film like this anymore. What’s that? NO sigh of relief from Tina? No feminist outburst? Nope, just a genuine lament at the loss of ‘sex-thrillers’ such as Basic Instinct, Fatal Attraction and director Jon Macnaughton’s Wild Things.

Apparently star and producer Kevin Bacon said this script was one of the trashiest he’d seen, and he’s right, it’s just on the edge of terrible, and the plot holes are as big as the Mersey tunnel, but this is a fun, twisty turny film that has great hammed-up (especially Theresa Russell who plays Sandra Van Ryan) performances from its cast, great scenery and Denise Richards orb-like breasts.

Florida High school guidance counsellor Sam Lombardo (Matt Dillon) is a working class guy dating a rich society girl. One of his pupils, the spoilt rich Kelly Van Ryan (Denise Richards) fancies him and manages to get him alone after washing his car and getting VERY wet. She leaves dishevelled and it appears she’s been rejected by Sam. She then accuses him of rape along with misfit ‘Grunge’ pupil Suzie Toller (Neve Campbell –breasts firmly covered at all times). Sam pays lawyer Ken Bowden (Bill Murray in a small part) to defend him.

Now I could carry on with the plot and tell you about Kevin Bacon, but instead  – if you haven’t seen Wild Things and you like those sleazy 90’s, “not really sexy” thrillers, buy Wild Things immediately, as it’s definitely one of the better ones. It’s been 20 years since I’ve seen it so had forgotten the story and was surprised and very entertained.

Review by Tina from a disc kindly supplied by Arrow Films via Faetch Publicity.

I used to live in Los Angeles and write about Rock bands. Now I live in wonderful Wales and write about films. I like video games (especially RDR2) and am also a painter...gratuitous plug: follow my art account on Instagram @artbytinar
Supersonic Blues Machine Reveal Video For “All Our Love” ft. Charlie Starr Review: Cop Secret