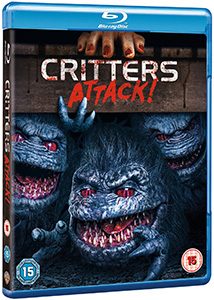 Continuing the story of the ‘Krites’ from outer space, which began back in 1986 with the original Critters, this 5th entry into the movie series once again has the rolling balls of fur with the ‘killer’ appetite once again invading small town America in an effort to take over the world.

20 year old Drea (Tashiana Washington) blames herself for her mothers death and desperately wants to get into the same college that her mother attended. 2 rejection letters later, she accepts a job babysitting the 2 children of a professor at the college, in the hope that a good word will then be put into admissions for her.

Drea’s younger brother Phillip (Jaeden Noel) is obsessed by aliens and swears that he has seen UFO’s crash-land not far from where he lives with Drea and their alcoholic uncle, who is also a local police officer…and of course does not believe in aliens.

Once again, when Krites are let loose on earth, their hunger for all things living puts everyone in danger, and it is left to Drea, Phillip, the professors 2 children AND the welcome return to the franchise of Dee Wallace as a kick ass alien hunter (sporting a gun that the Terminator would love to get his hands on) to try and save humanity.

Critters Attack! is silly…very silly. It is not especially bloody, despite Krites being ‘born’ from inside a human body ala the ‘chestburster’ from Alien, and various attacks on people biting their heads, arms and anything they can get a hold of.

The dialogue is ridiculous and the characters often do the usual horror movie things where you’re screaming at the screen “don’t do that!“.

The Krites themselves are practical effect hand puppets that wouldn’t seem too out of place replacing Edd the Duck or Gordon the Gopher on CBBC back in the day.

So it’s silly, not bloody, has ridiculous dialogue, relatively clueless characters and puppet monsters…and I loved it!

It took me back to my youth in the 1980’s watching VHS horror movies from the likes of Full Moon Entertainment , where unadulterated silly fun was often what drove these kinds of movies, and Critters Attack! keeps that same 80’s tone…even with a specifically tongue in cheek line from one of the characters saying “this isn’t 1986 you know“.

This isn’t Hostel, or It Follows, or Hereditary, this sits on a branch of the horror movie tree that is specifically for the lighter side of the genre, and if (like me) you enjoy movies from that particular branch, then there is a lot of enjoyment to be had from Critters Attack!

Review: The Missionary GLORYHAMMER tour sold out in multiple cities!