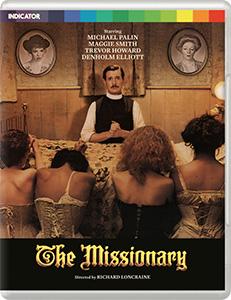 Written by and starring Michael Palin, The Missionary tells the story of the timid Reverend Charles Fortescue (Palin), who returns to London in 1906 after 10 years as a missionary in Africa and is tasked with saving the ‘fallen women’ of Soho.

Charles fiancee Deborah (Phoebe Nicholls) is innocent to the ways of the world and doesn’t exactly comprehend what Charles is getting involved with, while the wealthy Lady Ames (Maggie Smith) is expected to fund his work, she soon makes it abundantly clear that she expects him to take quite good care of her too…specifically in the bedroom.

Playing out like an elongated episode of Palin’s ‘Ripping Yarns’ (which is no bad thing at all), The Missionary pokes fun at religion, snobbery, the English upper class, and specifically its attitude towards sex in the early 20th century.

Eccentric characters do and say outrageous things, while Charles often has to fumble his way out of the many uncomfortable situations that he finds himself in.

Despite being centred around Victorian era prostitution and the many different sexual fantasies/needs of various characters, The Missionary keeps everything at a level that isn’t going to traumatise any kids that may wander past the television as it is playing.

Palin is fantastic as always, while the rest of the cast also do a great job of keeping you giggling throughout its 90 minute running time.

Presented here in a new 2k restoration from the original negatives AND in its original 2.35:1 theatrical aspect ratio for the first time ever on any home video format, this is THE way to watch a classic UK comedy.

The usual array of superlative special features on these Indicator releases makes this yet another title that should be added to your collection immediately before it inevitably sells out.