Allow me to begin with a bit of my history with Dawn of the Dead.

In the early 1980’s my friends dad got a VHS player from Radio Rentals (hello to all our UK readers that remember renting TV’s and video players) and part of the special offer they were doing included being given the choice of a VHS film to keep. For reasons still unknown to me he chose to bring back Dawn of the Dead.

My friend and I (both in our mid-teens) became obsessed with it and it was our regular “go-to” film whenever we got together. Viewings of it included a 24 hour Dawn of the Dead-athon, where we challenged ourselves to watch it non-stop for 24 hours (we succeeded), and also a memorable Christmas Eve evening where we started watching it about 8pm on December 24th and once again watched it repeatedly until the sun rose on Christmas morning.

I think it’s fair to say that Dawn of the Dead is my all time favourite film, and it is no exaggeration when I say that I have watched it over 100 times.

I own it on VHS, Laserdisc, various versions on DVD & Blu-ray (including a 4 disc set personally signed by George Romero). I have the fantastic coloured vinyl, gatefold sleeve double album soundtrack by Waxwork Records, have watched the movie on a big screen while Goblin played the soundtrack live onstage (I was standing front row and got to shake hands with Claudio Simonetti in-between tracks), and just 2 years ago fulfilled a longtime dream by visiting the Monroeville Mall in Pittsburgh…while being shown around by the lovely Lori Cardille (Sarah in Day of the Dead…Dawn meets Day! And yes, we did both pretend to be zombies in there).

Having read all of the above, hopefully it puts it into context when I say that this release of Dawn of the Dead by Second Sight Films is by far the best I own, and also the best that I’ve seen as far as picture quality and content.

I could end this now and just say BUY IT.

I pre-ordered the 4K version on day 1 (which I eagerly await arriving here) but was also sent the blu-ray screener discs which have been an absolute joy to watch.

For those who might not be familiar with the film, Dawn of the Dead follows Stephen (David Emge), Peter (Ken Foree), Roger (Scott H. Reiniger) and Fran (Gaylen Ross) who seek refuge in a shopping mall during a zombie apocalypse. Needless to say, not everything goes as planned. 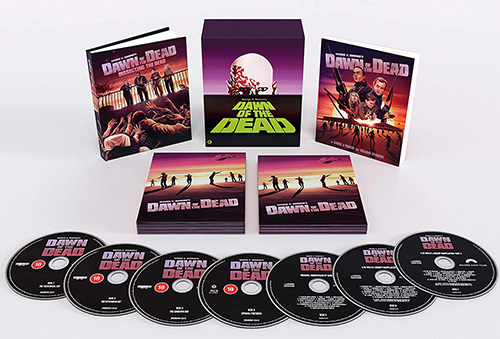 This 7 disc release (yes, SEVEN) has the extended ‘Cannes’ cut (137 minutes), the US theatrical version (127 minutes), and Dario Argento’s European recut (120 minutes). There are many other versions out there, but the core of the story remains the same.

The 3 versions of the film each have their own disc with special features, while the remaining 4 discs consist of a disc choc full of special features (many of them band new and exclusive to this release) and 3 audio CDs.

Also included is a 160-page booklet and George A. Romero and Susanna Sparrow’s novelisation of the film. Pre-order from Second Sight Films and you’ll also receive an exclusive 4 postcard set too.

The blu-ray version of the film looks pristine and I can’t wait to watch this in 4K for the 1st time! While all of the special features are incredibly informative and also very entertaining too…so much so that I’ve already watched them all multiple times. One of my favourites being ‘Memories of Monroeville’, where Michael Gornick, Tom Savini, Tom Dubensky and Taso Stavrakis revisit the Mall and share behind the scenes stories…you also get to see that Savini is not as fearless as he once was! Every one of the special features is something that you will revisit and enjoy.

If for some reason you don’t already own Dawn of the Dead, then this is the definitive version to buy if you don’t want just the film. For everyone else who is already a big fan, then this set should sit proudly in your collection.

***Watch out for my interview show with Scott Reiniger coming soon***