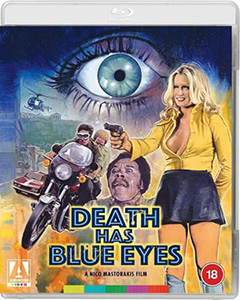 Writer/director Nico Mastorakis (Island of Death) once again takes the viewer on a wild cinematic ride in Greece.

Local gigolo Chess (Chris Nomikos) meets his friend Bob (Peter Winter) at Athens airport before the pair of them begin an adventure together that involves sex, scams, some more sex, booze, a bit more sex, and accidentally getting involved into becoming bodyguards for a telepathic woman whose controlling mother is not whom she first seems to be…then they have sex again.

At almost 2 hours long Death Has Blue Eyes does outstay its welcome at times, but Mastorakis uncanny skill of throwing in shootouts/explosions/car chases/helicopter attacks/motorcycle chases/nudity to grab the viewers attention once again is all present and correct in this Arrow Films blu-ray, presented for the very first time in a new HD master in both widescreen and full-frame versions..

With a narrative thread that very often forgets where the hell it’s going, some laughable “acting”, toe curling sex scenes, and editing that often leaves you confused as to what actually happened, Death Has Blue Eyes may well sound like you’d spend most of it fast forwarding or even switching it off…and a lot of people might just do that.

However, for everyone else who knows what they are getting into with a Nico Mastorakis movie and enjoy the wilder lower budget end of cinema, this goes from one ridiculous/hilarious/cringe inducing scene to another, culminating in a classic “WTF!?” moment.

Another for the “beers and mates” evening viewings.

Leave us a review and help to feed millions of people at the same time Review: Wake of Death