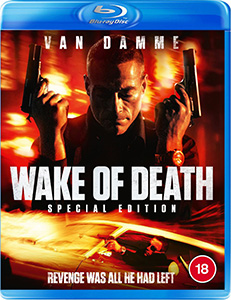 Entangled in a criminal world from which he wishes to escape, Ben Archer (Jean-Claude Van Damme) confides that he wants to retire from it all and live a peaceful life with his wife and son.

Meanwhile, Ben’s wife Cynthia (Lisa King), who works for the American Immigration and Naturalization Service, brings a Chinese refugee girl home, not knowing that the girl is the daughter of a Triad boss who ran away after witnessing him killing her mother.

Naturally the Triad boss wants his daughter back and Cynthia is a disposable barrier to getting her. Needless to say, things don’t go well for Mrs Archer, leaving Ben on a destructive mission to reap his revenge.

Wake of Death is your standard DTV action movie, but raised up above a lot of them due to JCVD showing his (often under appreciated) acting chops and making you really care about his character.

He only uses his martial arts skills on a couple of occasions, with the majority of the action being (surprisingly violent) gunplay, along with a torture scene involving an electric drill that borders on being from a Saw film!

A step up from a lot of Van Damme’s DTV output of the time, and for all you JCVD completists out there…yes, you DO get to see his bare buttocks in this.

Review by Dave from a screening link kindly supplied by Kaleidoscope Entertainment via Witchfinder PR.