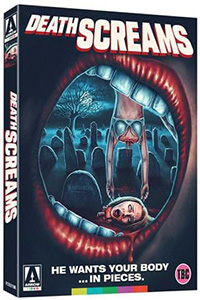 A low budget 1980’s horror movie that passed me by back in the heady days of renting VHS tapes! Thank you once again Arrow Films for releasing a title on blu-ray that I would have otherwise missed.

Anyway, onto the movie…

Beginning with a young couple making out on a motorcycle (certainly makes a change from the usual “groping in cars” scenario), they are brutally killed and their bodies fall into the adjacent river.

This is not the last you see of the dead couple, as intermittently throughout the movie they are shown floating unseen downstream…until of course they inevitably bump into a young woman skinny dipping who has to run screaming out of the water for yet another obligatory nude scene.

The main characters are high school students and all live in small town America, and as always in these movies are played by actors whose high school years are definitely behind them.

After the initial killing at the very beginning, a large chunk of the running time is spent with these characters as they go about their day to day lives, and while the acting is never award winning, there’s a certain charm to them all which kept me entertained even while nothing very much was happening.

There is of course the usual “WTF” scenes that I love in low budget movies, a prime example being one character who is shot with an arrow, and instead of running where people are for help, stumbles to an abandoned merry-go-round, gets on one of the wooden horses, acts a bit surprised when it starts to spin, and then even more surprised when a plastic bag is put over their head to kill them…doesn’t even bother to poke a breathing hole in the bag with their fingers either!

The majority of the deaths come in the final 15 minutes, and while not up to the gory standard of a lot of 80’s slasher movies, are still good enough to make you smile…if watching people being beheaded is your “smile” type of scene of course!

Slow paced and as corny as the Green Giant’s underwear, Death Screams has an innate charm that makes it well worth watching…especially when accompanied by the following great special features.