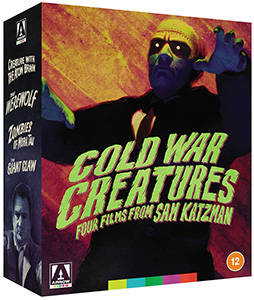 If you’ve listened to me on any of our podcasts, or read my reviews here on our website, you’ll probably have an idea about my taste in movies. So if you usually tend to agree with what I enjoy, then read no further and buy this great set of B-movie monster flicks…all with great transfers and accompanied by brand new extras.

I’d only previously seen 1 of the movies in this set (Zombies of Mora Tau), so Creature with the Atom Brain, The Werewolf, and The Giant Claw! were all completely new to me…and none of them let me down.

Low in running time, yet high in entertainment, all 4 movies had me thoroughly entertained, beginning with my first look at the creature with the atom brain, which (spoiler alert!) is in fact CREATURES with Atom Brains! Yes, more than one person gets involved when a mob boss hires an ex-Nazi scientist to reanimate his dead thugs…and yes, you DID read that correctly!

The conclusion is of course inevitable (do bad guys ever win!?), but it is the ride to get there which makes it great viewing.

There’s a large dollop of pathos thrown in to The Werewolf when a doting husband and father to a young son is involved in a car accident and then used as an experimental subject to create a vaccine for nuclear fall-out.

The vaccine doesn’t work as planned as has the unfortunate side effect of turning him into a werewolf at the most inappropriate moments and also whenever he gets angry…something which the current Covid vaccines thankfully haven’t been accused of (yet!).

Despite being a “creature feature”, this is the most ‘human’ story of the set and concludes in a way that I certainly wasn’t expecting.

Zombies of Mora Tau is the only one I’d seen before, but never with such great picture quality, which made it almost like a first time viewing again.

While searching for diamonds in a sunken ship (awesome underwater effects by the way!), treasure hunters get far more than they bargained for…could it involve zombies I wonder?

Rounding of this set is The Giant Claw! and I have to say that this one is definitely my favourite, complete with many scenes that I immediately skipped back to watch again…and again.

The narrative is all about a giant bird from outer space (keep with me here) that is attacking aircraft and killing people…imagine if Rod Hull’s Emu had a giant mutant outer space relative and attacked people quicker and more viciously than Emu did with Michael Parkinson’s testicles.

This is an absolute hoot and made even more enjoyable by the visible wires, tiny model aircraft and rear projection.

The special features include an introduction to all 4 movies by Kim Newman (well worth watching before you dive into the main feature), commentary tracks, essays and more. Arrow Films always include an extensive set of extras, and this is no different, including an 80-page collector’s art book, 2 double-sided posters, reversible sleeves and the great packaging we’ve come to expect from them.

Put your feet up and enjoy 4 highly enjoyable B-movies from Sam Katzman.

DISC 1 – CREATURE WITH THE ATOM BRAIN

DISC 3 – THE ZOMBIES OF MORA TAU

Review: Death Screams Review: One of Our Aircraft is Missing