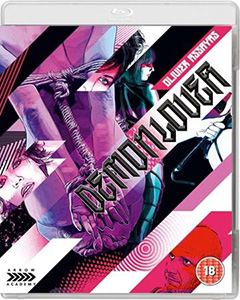 The biggest problem I found with the film that irked me to no end, was its attempt to constantly imitate other films. I almost feel like the director wanted to copy the film he watched the previous night but every other night was Mulholland Drive night. There’s this Lynchian split halfway through the film where the tone switches from broody neo-noir to, well, Mulholland Drive again. To the film’s credit, the switch at least feels earned. It’s not so out of left field that it’s ridiculous, neither is it without an apt amount of gravity. The problem is that the switch does little to evolve the film from this point into anything more than slightly less dull than the first half.

I would like to clarify that I didn’t hate Demonlover. Really, I didn’t. It’s strange enough at least to be gawk worthy and at certain points there is almost something that resembles a somewhat interesting film. But the film constantly loses itself in its own pomposity that anything the film does well doesn’t feel earnest. It feels like it’s assuming what an experimental narrative would do next; most sequences feels like a poor impression of something else. Once the beats are noticed any intrigue and personal identity the film has is lost all too quickly.

Confusing, messy and lacking in a personality of its own, Demonlover is at least worth something on gawk factor alone. Worth a watch if there is absolutely nothing else to hand.

Review by Joel from a disc kindly supplied by Arrow Films.

I like to think I'm a critic out of spite for all the criticism I receive in film school. I enjoy consuming all things entertainment and art but I enjoy pretending I could do any better even more. Jokes aside, I absolutely adore creating and interacting with all art and entertainment. Always happy to air my obnoxious opinions on games, films and music and I can only hope you also get some kind of sick kick out of reading them.
Live Event: Yola, Hare & Hounds, Birmingham, May 28th, 2019 Lordi release ‘Recordead Live – Sextourcism in Z7’