Review: Diary of a Mad Housewife 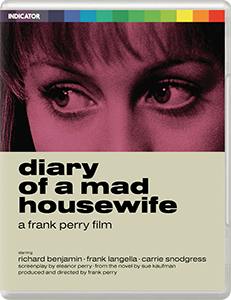 Never-before released on blu-ray in the UK, Diary of a Mad Housewife is one of those films you’ve heard about, but never got to see.

Directed by Frank Perry (The Swimmer, Trilogy, Mommie Dearest) it stars Carrie Snodgrass as Tina the ‘mad’ housewife and the whole film is interestingly and unflinchingly from her point of view.

She’s a young mother of two girls (both obnoxious and treat her like dirt) who’s married to successful lawyer Jonathan (Richard Benjamin) who also treats her  – well… like his own personal slave, physically, mentally and sexually (he keeps asking her if she wants a ‘roll in the hay’ and even now it will make you cringe with sheer creepiness). He doesn’t listen to her, abuses her verbally any chance he gets and is a social climber, dragging her to parties filled with famous people who despise him.

At one of these parties she meets writer George Prager (Frank Langella – looking very young and incredibly handsome), who seduces her, then immediately begins to treat her in a similar way to her children and husband, with utter contempt. They continue their affair which ends when he becomes bored of her.

This sounds like a really negative and depressing film, and you know what? It IS from Tina’s point of view. No one gives a shit about her, yet she battles on. Most women would have had a mental breakdown.

The interesting thing about the film, and the reason it holds together and keeps your attention, is Snodgrass’s performance. Wide eyed and pretty, delicate and clever, she portrays a woman who is educated, yet trapped by patriarchy, she has so much to offer yet her sex stops her. She’s been brought up to marry well, and suffer silently.

Really worth a watch, and despite her never ending abuse at the hands of others, it does make you wonder how much things have changed since 1970?

I used to live in Los Angeles and write about Rock bands. Now I live in wonderful Wales and write about films. I like video games (especially RDR2) and am also a painter...gratuitous plug: follow my art account on Instagram @artbytinar
FrightFest recruits for New Blood class of 2022 Review: Munster, Go Home!