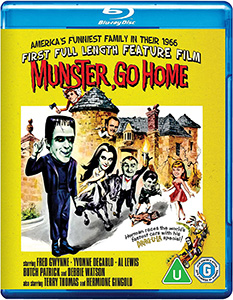 The 2 most infectious laughs when I was a kid belonged to the animatronic laughing man outside the Funhouse in Blackpool, and Herman Munster (Fred Gwynne). The laughing man (and the Funhouse) went many years ago, but thanks to this blu-ray release by Fabulous Films, I now have another way to relive my youth.

The Munster’s first foray onto the big screen has them leaving their home in America to travel to England after Herman discovers he’s the new Lord of  Munster Hall. Needless to say the English relatives are taken aback at the appearance of their American relatives and resort to underhand ways to stop Herman becoming the new Lord of the Manor.

All the usual gags are present and correct…feeling sorry for how Marilyn looks, Grandpa’s magic going wrong, Herman acting like an oversized child, but this just gave me a feeling of comfort as the gags and nods to camera kept coming. There was even a none too subtle nod to Fred Gwynne’s previous TV show Car 54, Where Are You?

I’ve deliberately avoided describing who (or more to the point, what) the Munster’s are, as I’m assuming most of you are already familiar with this wonderful family, and for those of you who are not, I don’t want to spoil the surprise before you find out for yourselves…which you should.

This had me smiling all the way through, and once again had me hankering for a coffin dragster to drive.

Fun and silly humour for all ages.

Review: Diary of a Mad Housewife STRYPER : ‘See No Evil, Hear No Evil’