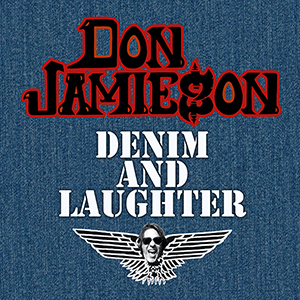 Many years ago my Dad introduced me to the joys of the comedy album, sitting me down with him and listening to The Goons, Blaster Bates, and Monty Python. Both of us laughing like mad…especially when there was something a bit rude in it.

As I grew older I bought albums by Billy Connolly, Derek and Clive, and Jasper Carrott.

So when an advance digital copy of Don Jamieson’s upcoming comedy album ‘Denim and Laughter” appeared in the 60MW inbox, my attention was immediately piqued.

Following on from his previous 3 stand-up CD’s ‘Live & Hilarious’, ‘Hell Bent For Laughter’ and ‘Communication Breakdown’ (all of which hit the Top 20 on iTunes and Top 10 on the Billboard comedy charts), ‘Denim and Laughter’ has a rock themed album title and cover, and features Don giving his thoughts on all sorts of subjects.

Much like all of the great comedy that I grew up listening to, Don doesn’t tell jokes, he instead gives his observations on an eclectic range of subjects, all while not giving 2 shits what anyone else thinks…which is just how I like it.

If you like your comedy uncensored, then Denim and Laughter is just what you’re looking for, and if you’re the type that’s easily offended and would get upset at Don talking about people wanting Def Leppard to change the bands name to “hearing impaired leppard”, then guess what…instead of getting offended and complaining online, just don’t listen, and leave this comedy to people like myself who have enjoyed it for years.

Don Jamieson keeps my love of the comedy album alive, and now of course I would love a KISS themed comedy album from him…”Laugh It Up’ possibly!?

‘Denim and Laughter’ was recorded in a secret speakeasy location in Los Angeles on October 19, 2019 to about 40 hardcore fans. Now the rest of you can enjoy it!

Don will be hitting the road in the UK and Europe this spring with Biff Byford. Each show will take an “evening with” format and will be split into two halves. The first half will be a comedy set by Jamieson, who will quiz Biff on all aspects of his life and his legendary career. The second half will be a live show featuring Biff and his solo band. As Biff explains: “The show will consist of some old songs, some new songs, some cover versions and some songs off the solo album.”

See below for all dates!

*I’ll be there at the Liverpool gig…hopefully a lot you will too.