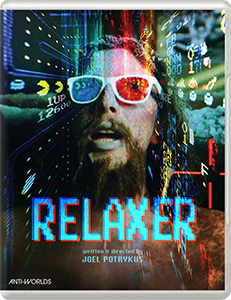 Lime Wood Media (the people who have the fantastic ‘Indicator’ series of releases…many reviews of which can be found on our website) have launched their “Anti-Worlds” collection, of which the first 3 are available from 24th February 2020, and all will be reviewed here before release day.

Set on the eve of the year 2000, Relaxer introduces us to Abbie (Joshua Burge), a young man sat on a couch in his apartment and attempting to complete a challenge by his brother, Cam (David Dastmalchian).

The challenge involves drinking milk at regular intervals until all of it has gone. So far, so easy, you may well be thinking. Well unbeknown to me, “milk chugging” is a real thing and is also highlighted in one of the great special features in this 2 disc set.

Failing spectacularly at the challenge, Abbie is then even more committed to show his brother that he can rise to a challenge. Unfortunately for Abbie, the next challenge that Cam sets him is to beat level 256 on Pac-Man…something that is impossible due to a coding glitch in the original game.

What follows is Abbie’s mental (and physical) state slowly deteriorating as he steadfastly refuses to leave the couch and increasingly has to rely on the help of friends to get him food. His friends however are thin on the ground, and what starts out as a video game challenge, descends into a surreal battle for survival where snow and shoe leather are the height of sustenance.

The 4th feature film to be written and directed by Joel Potrykus, Relaxer is limited in its camera movement and angles, mostly due to the very nature of the whole narrative being set around a guy sitting on a couch. However, this works well due to the screen presence and performance of its lead Joshua Burge, and also because the whole premise and execution of the situation is unfolded before you at such a languid pace that you can feel an empathy for Abbie and relate to why he wants to complete this challenge…despite how weird and wonderful the narrative becomes.

Relaxer kept me hooked until the very end, and of course my main thought while watching was “is he finally going to complete a challenge?“

To find out if he does, buy this great Blu-ray release which is packed with highly enjoyable special features.

Also included in this 2 disc set is another Joel Potrykus/Joshua Burge movie: Buzzard.

Buzzard casts Joshua as Marty Jackitansky; a wannabe small time scam artist who tries to get as much as he can by doing as little as he can. Unfortunately for him, his lack of foresight has him fleeing from his workplace and hiding out in Detroit, with only a pocket full of illegal cheques and his homemade “Power Glove” to keep him alive. He now has just a singular aim in life: to survive.

With more locations and a bigger variety of characters, Potrykus gets to show more of what he can do with both script and camera setups, and I’m very happy to say that I loved what he did on both counts.

The script is witty and incisive, and once again delivered within a fantastic performance by Joshua Burge, whose screen presence in both movies kept me locked to the screen.

Despite having the ability to free the camera more, Potrykus isn’t afraid to lock it down and keep it held in one long shot. A prime example being where Marty ‘splashes the cash’ on a fancy hotel and lies in bed eating spaghetti. The camera doesn’t move as Marty wolfs down the food, spilling it across his clean white hotel dressing gown while watching TV. The scene continues as his greed manifests itself in bigger and bigger mouthfuls of spaghetti being shovelled into his mouth, all while the viewer has no choice but to watch him devour it all. This pays of brilliantly when Marty finds himself in far different circumstances, albeit still eating spaghetti.

Buzzard has a twisting narrative that gives you a main character that in equal parts is very annoying, but also has a certain charm that secretly has you committed to wanting to find out his fate. It also has plenty of laughs and a dash of pathos too, all once again due to the onscreen presence of Joshua Burge.

Thanks to this fantastic double disc release, I am now eager to watch more from Potrykus and Burge…even little things like “Return of the Living Dead” being referenced in both movies piqued my interest and made me even more enamoured with the work of Joel Potrykus.

If you want to take a step away from the more ‘mainstream’ side of cinema, then make sure to follow Anti-Worlds very closely indeed…I certainly will.

Review by Dave from discs kindly supplied by Anti-Worlds.