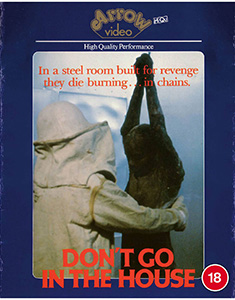 Available in both a Limited Edition and an Arrow store exclusive ‘Video Nasty Edition’, this new 2K restoration from the original negative by Severin Films brings new life to a movie that infamously was a part of the whole “video nasties” debacle here in the UK during the 1980s.

Donny Kohler (Dan Grimaldi) has been obsessed with fire since his early years due to the mistreatment of him by his abusive mother, and returning home one day after work finds that she has passed away.

Now left alone in the huge old family mansion and no longer controlled by her, he allows his violent revenge fantasies against her to become reality, luring women back into his home so that he can now be the one to be in control of the fire…and the pain.

Grimaldi is fantastic in the role of Donny Kohler, oozing a sense of barely restrained anger and frustration, all while having to keep it under control so that he can play his little mind games with women to get them back to the sheet metal encased torture room he’s constructed back home.

While unsettling with its scenes of violence (now fully uncut and making its UK high definition premiere), Don’t Go in the House is also a character study of one man’s complete mental breakdown once the parental shackles he has endured for so many years are now no longer there.

It has of course dated over the years, particularly in the disco scene (and where he goes shopping for his disco clothes too), but there are still relevant messages to be taken from it, specifically regarding who you should and should not accept any help from if you’re not sure who they are.

Keeping the rotting corpse of his dead mother locked in a room of course brings Psycho to mind, while also keeping the charred remains of his burnt victims throws in another layer of misogyny that runs throughout the entire narrative.

The “burning someone alive” effects are still effective (though dated too), especially when applied to a naked woman left helpless hanging in the middle of an empty room. Other nasty little effects are scattered throughout, which all added up to the BBFC taking a dislike to it back in the day and adding it to their video nasties list.

The 2 disc limited edition has 3 different versions of the movie, complete with a large array of excellent special features, including some very interesting and informative commentary tracks and interviews.

While the 3 disc ‘Video Nasty Edition’ adds a 1080p theatrical version from a 2K scan of an uncut British internegative, in widescreen and ‘exposed open matte’ presentations with original lossless mono audio. Cinema mode; where you can watch the film with a recreation of an opening cinema programme from the early-1980s (which I LOVED and brought back many memories), and VHS Mode: watch the film in a transfer of the original ‘video nasty’ VHS release, with uncut and censored options…again, another feature which brought back many memories, this time of originally watching it all those years ago on a rental VHS (pre-the video nasty brigade taking them all off the shelves).

One of the better “nasties”, Don’t Go in the House looks superb in this release, and accompanied by all of the special features on the discs as well as newly commissioned artwork by Christopher Shy and an illustrated collectors’ booklet featuring new writing on the film by Lindsay Hallam and James Flower, make this an essential purchase for any horror movie fan.