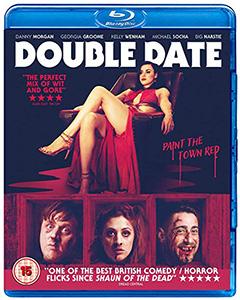 On the cusp of his 30th birthday, nice guy with ginger hair Jim (Danny Morgan), who is also a virgin, finds out that his girlfriend is shagging someone else. To cheer him up his best mate Alex (Michael Socha) takes him out to a bar with a promise of losing his virginity before midnight when he reaches 30.

Sounds pretty run of the mill (except for the whole ‘dead dad’ and head smashing thing of course). However, Double Date is anything but. Written by and starring Danny Morgan, who plays a man/child; freckled, nervous and hopeless, he can’t believe his luck when beautiful Kitty gives him the glad eye from across the room in a bar.

Wenham underwent months of training before she took on this part, and it really shows, as she not only LOOKS rock hard (ab city!) but also looks like she could genuinely beat you to death. Playing the more psychotic sister, Wenham’s face contorts out of range of the people around her, keeping a secret only we know, and giving palpable chills at to what she’s capable of.

The other sister; Lulu, appears sympathetic and only goes along with her murdering sibling for a quiet life. Groome says more with one glance of her big brown eyes than 100 words…hoping Kitty will stop, yet knowing that she won’t.

Of course all the best lines (apparently there was also some improv in this film too) come from Socha, with his wide pleading eyes looking so innocent, and whose Derby accent and inflection are just perfect for the part of a best mate who’s a bit of dickhead…but you can’t help but love him.

Then we have the virgin Jim. Morgan wrote this, and the life of a chubby ginge isn’t all rainbows. I know this being a fat ginge myself. But the way Morgan plays this version of a shy, daft lad is perfect, from lying on the bed in his pants making model dinosaurs, to playing annoying drums in the car while off his tits on drugs.

I like good films that have a beginning, a middle, and an end. They’re pretty rare, so when I find one, I embrace it. This is one of those films. Considering this is Benjamin Barfoot’s first feature, there’s nothing amateur about it. From the staging of the shots to the lovely wash of watercolour hues, and of course his genius insistence at getting GOAT to do the soundtrack.

Music can be a hugely important part of a film and Barfoot’s use of GOAT is inspired. Throbbing rhythms and female vocals (“boy you’d better run to your mother now“) are a perfect fit the way they move the narrative along and even illustrate it.

There are so many memorable moments in this film, from Jim going back to see his family high as a kite to get his birthday present and cake (big kudos for Eri Jackson, for not only playing the sister but for THAT birthday song). Meeting Alex’s dad (Dexter Fletcher) in a caravan, and the amazingly long fight scene between Socha and Wenham, that is brutal but also funny, and thank GOD, he HITS her, no pussyfooting here, she is a bonkers serial killer after all.

The end itself is …a good solid satisfying end. Something else a lot of films struggle with.

This is a real stand-alone film, funny, snappy, horrific, good acting, great story, and it stood the phone test…not one glance at it. And importantly it’s British.

It also boasts one of the most hilarious commentary tracks I’ve heard (I think they might have been a bit pissed) since Kurt Russell and John Carpenter did The Thing.

I used to live in Los Angeles and write about Rock bands. Now I live in wonderful Wales and write about films. I like video games (especially RDR2) and am also a painter...gratuitous plug: follow my art account on Instagram @artbytinar
Review: Astro Bot Rescue Mission Hawk Eyes release new video for ‘Never Lead Me’