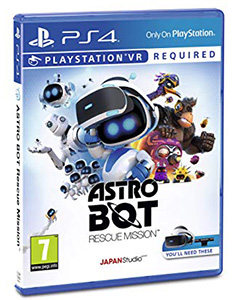 A few years ago, I wrote about my love for PSVR and proudly proclaimed it as number one in my top ten video games of 2016.  I (quite rightly) received a bit of criticism from people who said “PSVR isn’t a game you fool!”  Although I was maybe a little misguided in my praise, I’m sure you can understand my sentiment as I should have just written “PSVR IS BLOODY BRILLIANT!”

I’m not the only one who praises PSVR, and you only have to read Colm’s review or Adam’s reviews of Ghost Giant and Table of Tales: The Crooked Crown to see that I’m not just a poor delusional fool taken in by the new shiny.

Despite my love for PSVR, I unfortunately had to part ways with it in 2017. I was initially sad, but life moved on and other video games were played.  However, due to an amazing deal and a change for the better in my finances meant that I was reunited with PSVR in 2019.

I knew I had missed a lot of highly rated virtual reality games over the past 2 years, and I knew PSVR would be great, but I didn’t expect to be blown away all over again. Which is where Astro Bot comes into my life, and like Mary Poppins it is practically perfect in every way.

Astro Bot is a 3D platformer where your quest is to rescue your robot buddies which have been scattered across the universe by an angry alien. Ok, so the story isn’t going to win any awards for originality, but that never stopped Mario from rescuing Princess Peach on countless occasions.

The main difference between Astro Bot and other traditional platform games is that you are the camera watching everything that is happening. Every time I put on the PSVR headset, I was transported to another world that filled me with pure joy and a genuine love for the game I was playing.

Although Astro Bot is extraordinary in many ways, it also has a lot of traditional features seen in other 3D platform games. The controls are very simple, and you use a regular controller to move Astro Bot. You can jump and use a jetpack to give you a small boost to get to harder to reach platforms.  You can also punch enemies that attack you. If you hold the punch button down for a few seconds you can unleash a spinning attack which can defeat multiple enemies.

The enemies don’t pose much threat and if you do die there are regular checkpoints to get you back into the game. The only time you need to worry about health is when you face a boss. You get two hearts and if you die, you have to start the boss battle from scratch. That being said, the bosses aren’t too taxing, and you can figure out their attack patterns quite quickly. It is also worth saying the bosses are simply incredible and the icing on an already delicious cake.

One of the many joys of playing Astro Bot is moving your head around watching him running around. Seeing him waving at me as he ran above my head was an incredible feeling that made me smile and left me feeling astonished every time. Just to add to the immersion you also have to use your head occasionally to smash down walls or duck from bombs being fired at you.

There are five worlds to explore with each world containing four levels and one boss. The levels themselves are relatively short and can be completed within 10 to 15 minutes. There are eight robots to find in each level, with some being relatively straightforward to others which take a bit of lateral thinking. Additionally, there is a chameleon hidden around each level which is harder to find. These unlock a challenge level which can be played separately to the main game.

The levels themselves are utterly glorious! If you’ve ever played a platform game, you’ll know that there are always different themes such as, spooky or underwater levels. Each level offers lots of variety and you are constantly engaged. At no point did I ever feel bored. For me the sheer sense of scale was mind-blowing, especially when I stared up at a giant waterfall, or when a huge robot was looming above me. The graphics themselves are so bright and colourful and I couldn’t help being amazed at the sheer amount of personality on display.

As you get deeper into the game new mechanics are introduced which are simply wonderful. You use the touchpad on the controller to either spray water on lava, fire throwing stars at bamboo to cut it down, or create a zip wire for Astro Bot to reach higher platforms. The reason why Astro Bot works so well is because it doesn’t reuse the same gameplay mechanics to a point where they are repetitive. Astro Bot never feels gimmicky and it is very clever about how and when it introduces new gameplay elements. Basically, you never feel like you do the same thing twice.

The music in Astro Bot is absolutely wonderful. Throughout the whole game I couldn’t help but smile as the upbeat tunes which added personality and charm to the whole package. It may sound silly but ducking my head into a pool of water and hearing the music subtly change was one of the most incredible gaming experiences I’ve had. The best thing about it is Astro Bot is filled with these types of moments.

The final few levels are superb, and I got the sense the developers really had fun creating them. If I have one criticism of Astro Bot it is that there isn’t enough and I wanted more! It took me about 4-5 hours to complete the game, and now I’m working my way through the challenge levels. They say the best things come in small packages and that is very true when it comes to Astro Bot.

I’m sure I’ve read elsewhere that if Nintendo made a virtual reality game it would be Astro Bot. That is high praise indeed based on the quality of Nintendo platform games. But it also perfectly sums up how I feel about Astro Bot. When virtual reality is done correctly it can truly be a magical experience. Astro Bot is stunning in every department and one of the best games I’ve ever played. If you haven’t guessed already, I love Astro Bot, and if you own PSVR it is an essential purchase.

I love video games and movies as much as I love my children. However, I'd rather face off against the worst end of level boss, and watch the scariest horror movie than visit another soft play! Thanks for taking the time to visit the website and read this review. Please send any complaints to Dave and any money to me!
Review: Flight of the Navigator Review: Double Date