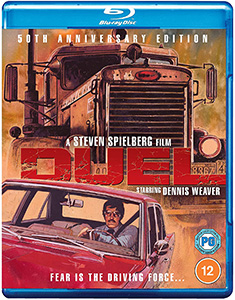 A lone man (Dennis Weaver) in a car being terrorised by a mystery driver in a truck may not sound the most thrilling narrative thread to hang a 90 minute movie on, but under the assured direction of a young Steven Spielberg from a story by Richard Matheson, Duel has kept viewers on the edge of their seats for 50 years now.

Released on Blu-ray & DVD by Fabulous Films to celebrate the 50th anniversary of its release, now is the perfect time to buy whether you’re familiar with the cat and mouse games it contains, or if this is a movie you’ve never seen.

David Mann (Weaver) is a travelling salesman who finds himself caught behind a slow moving truck while on a long stretch of road. His decision to overtake begins a tense series of events which escalate out of control as David suddenly finds himself on the receiving end of a relentless personal vendetta by the mystery truck driver.

Duel is a masterclass in building tension, with each move David makes leading to yet another escalation of events, none of which fair well for David making it to the end of his journey.

50 years on and Duel is still a ‘must see’ movie, and this release with its extra features and new artwork is a great addition to anyones collection.